Palace of the Popes

The Palace of the popes in Avignon 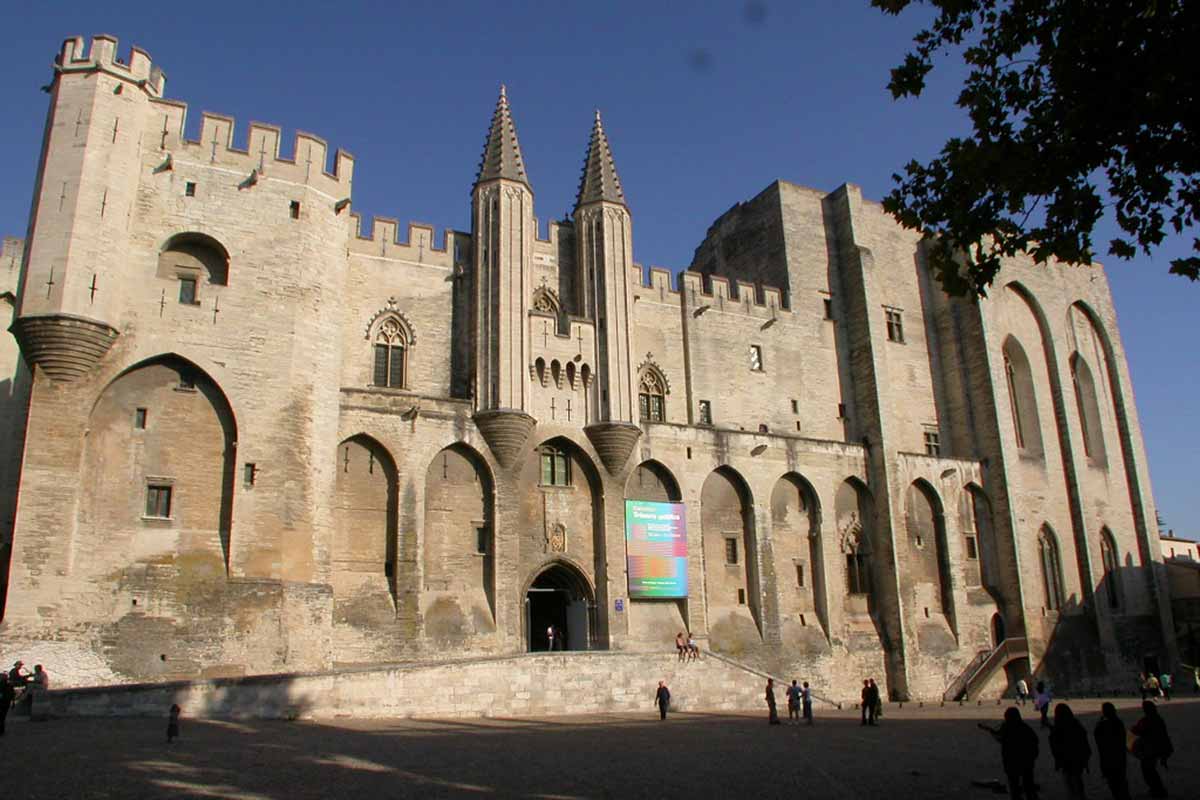 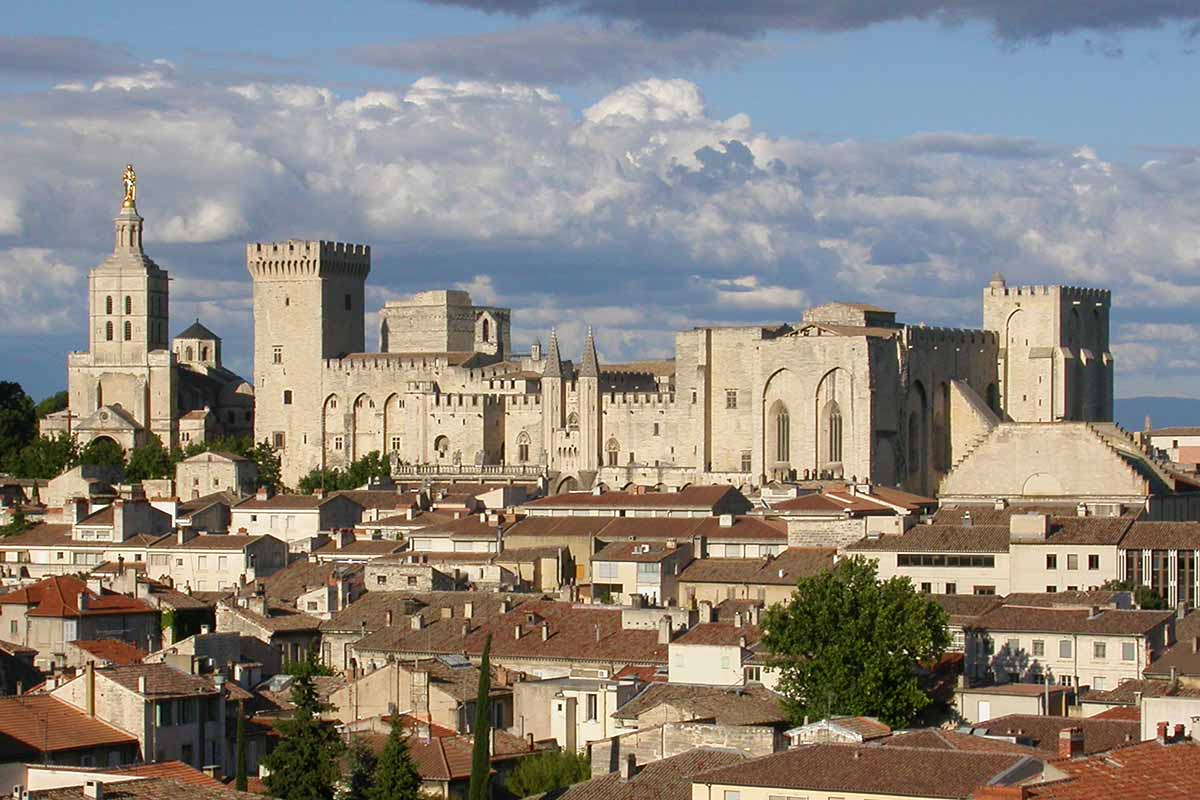 The wealth and the glitter of the pontifical court vanished a long time ago, but the palace still stays, superb fortress raising its impressive walls to the sky, imperturbable witness of the temporal and spiritual power of the Popes in the middle age.

From its 50 metres high tower, the Palace of the Popes crowns Avignon and its city walls, and give to the city its exceptional character. More than 650 000 visitors per year come to Avignon to visit the monument, it is one of the 10 most visited monument in France.

The pope Benedict Benoît XII (1334-1342) intends to settle the papacy in Avignon, he starts the construction of a great papal palace, on the site of the ancient episcopal building occupied by his predecessor John XXII. He appoints the architect Pierre Poisson, born in Mirepoix in the Ariege region where from the pope lived previously as bishop. 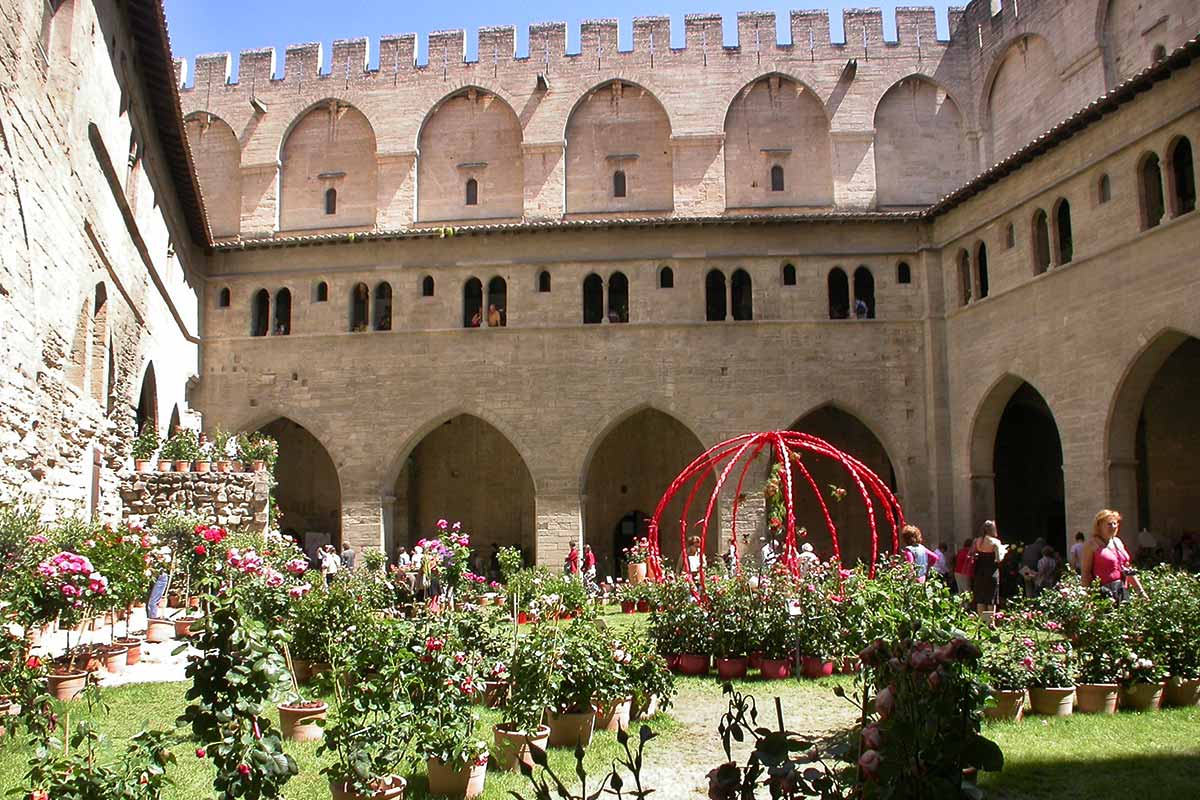 The works start in 1335 by the erection of the donjon the "Tour du Pape" and the Chappel of Benedict XII. The old episcopal palace is destroyed and two mighty new towers raise from the ground : the Tour Campane and the Tour de Trouillas surrounding a cloister.

The architectural style is simple, pure, with no useless fantasy. The impressive walls radiate a feeling of austerity, wich was the character of the pope Benedict XII, a cistercian monk.

This part of the palace is called the "Palais Vieux" (meaning "old palace").

During the Popes times, the Palace swarms with a rich court of cardinals, prelates, ambassadors of all european courts. The pope manages the Church affairs and he keeps up an intensive diplomatic activity. The palace is also a military fortress, which must insure the protection of the Pope, and must shelter the precious - and reputed huge - treasures of the Church, stored in the "Tour du Pape". 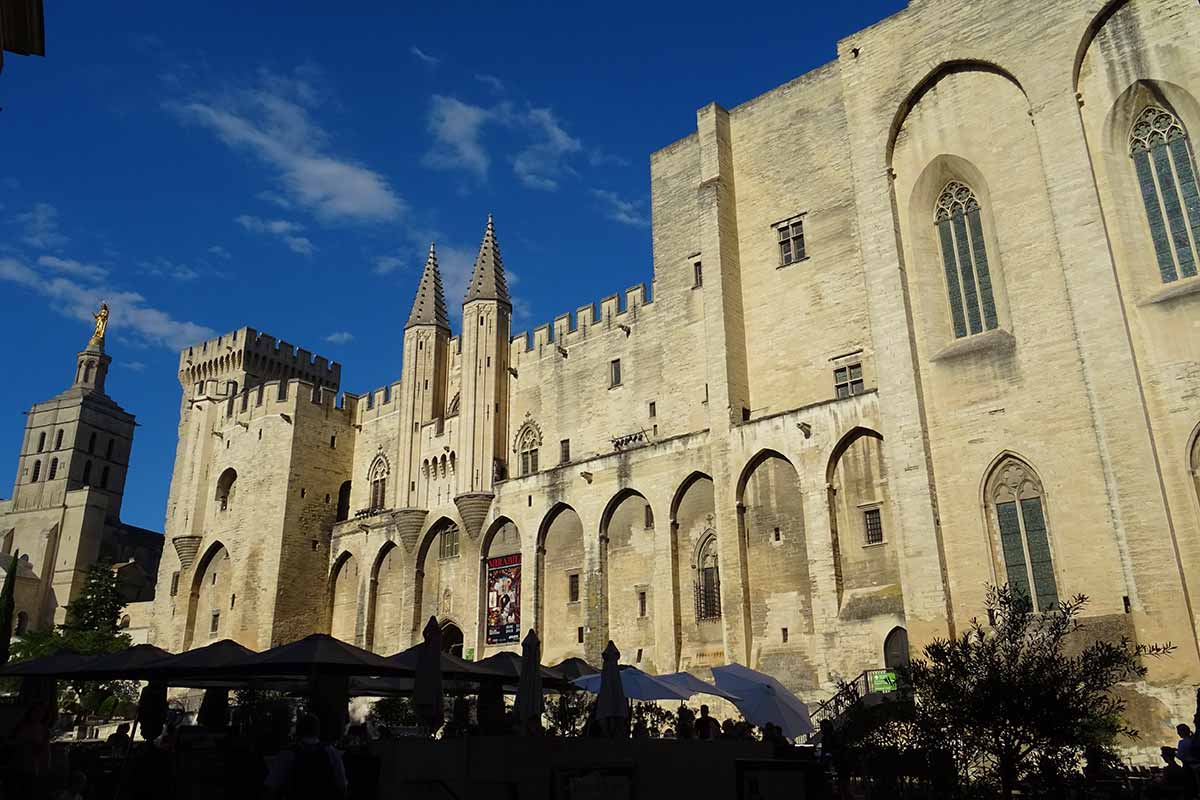 Right after succeeding Benedict XII, Clement VI decides to extend the palace. Coming from the nobility, the new pope is a munificent prince, a "Prince of the Church" prefiguring the popes of the Renaissance period. He adds a new palace to the one just built by Benedic XII, doubling thus the area of the Palace of the Popes.

Clement VI entrusts the construction to Jean de Louvres, a french architect from the region of Paris. The erection of the "Grands Dignitaires" wing enclose the vast Cour d'Honneur, a public place until now.

The facade is still impressive, the palace stays as a military fortress, but inside Jean de Louvres implements technics and spirit of the gothic architecture. Ogival arches give volume to decorated halles and rooms. The palace is achieved in 1363 by Innocent VI, Clement VI's successor.

The pope is surrounded with the greatest artists of his tim, the rooms are decorated with splendid fresco painted by the italian masters Simone Martini and Matteo Giovannetti of Viterbe.

More refined than the previous one, the Palais neuf marks the apogee of the papacy in Avignon. It is a witness of the might and the influence of the Church during Middle-Age. It already announces in this 14th century a new artistic breath which will flourish next century in Italy. 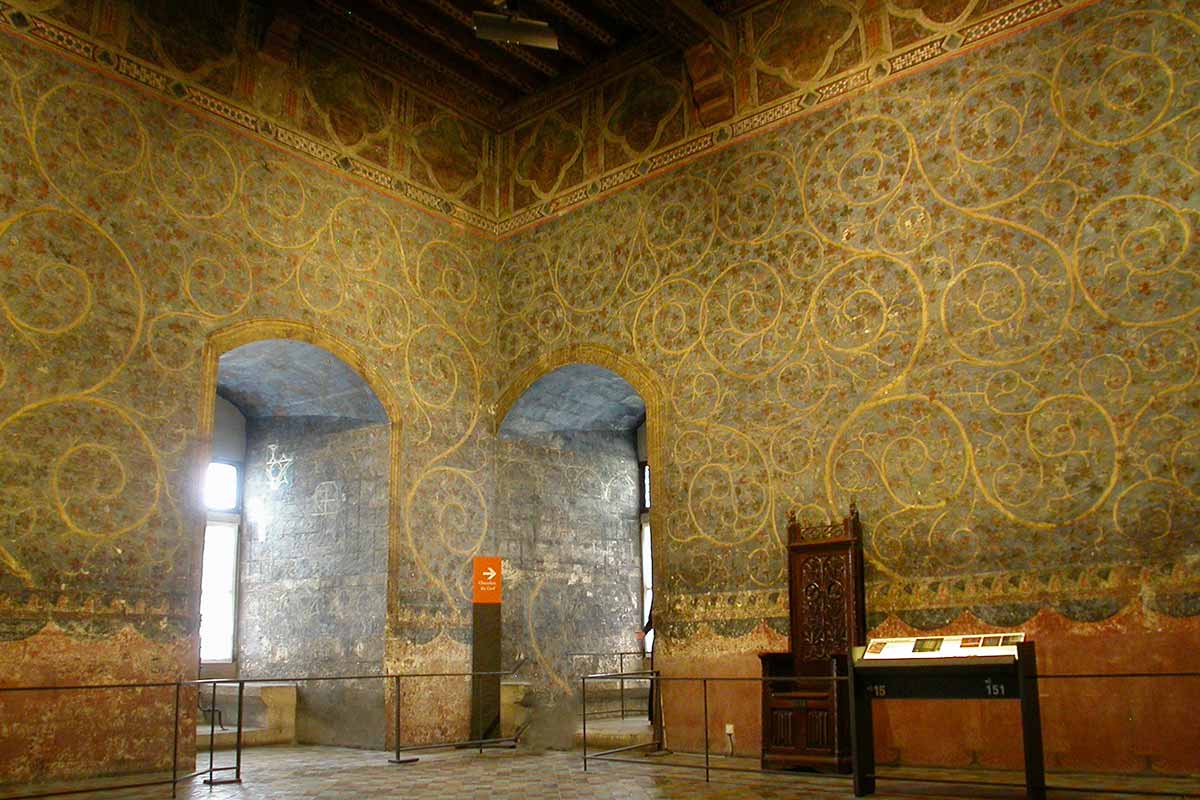 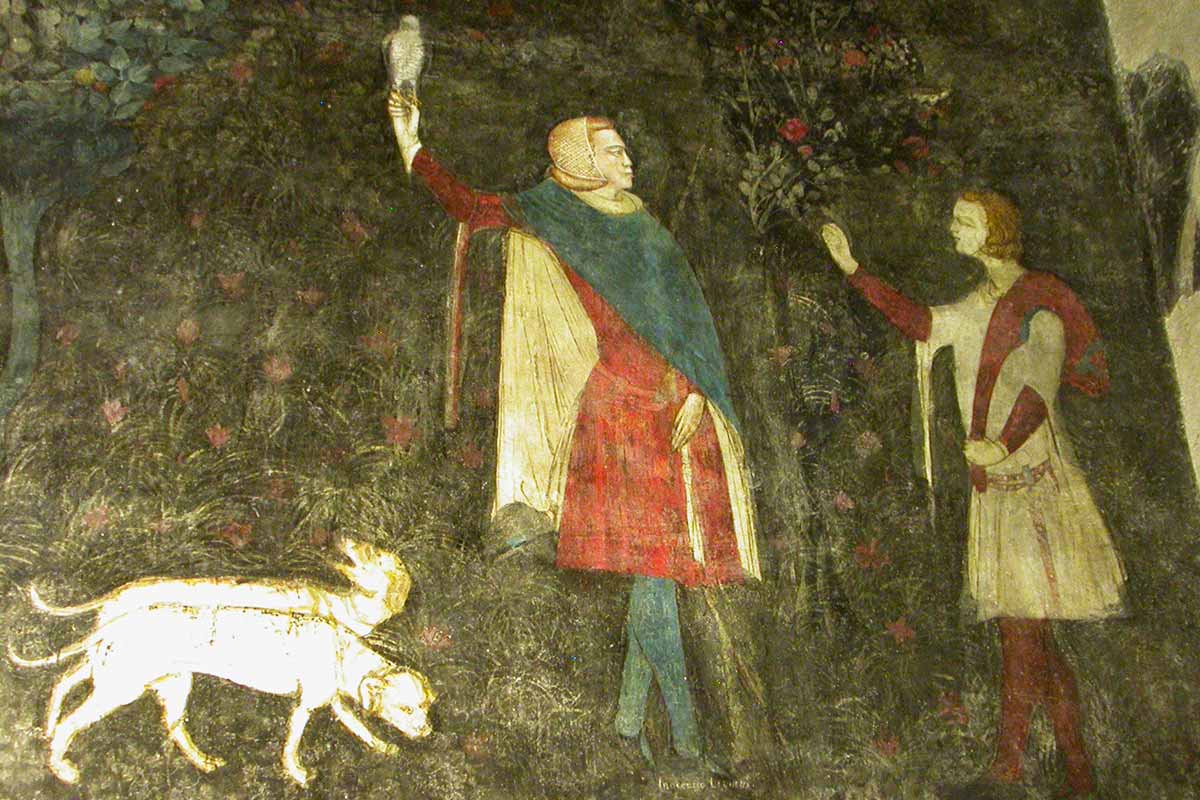 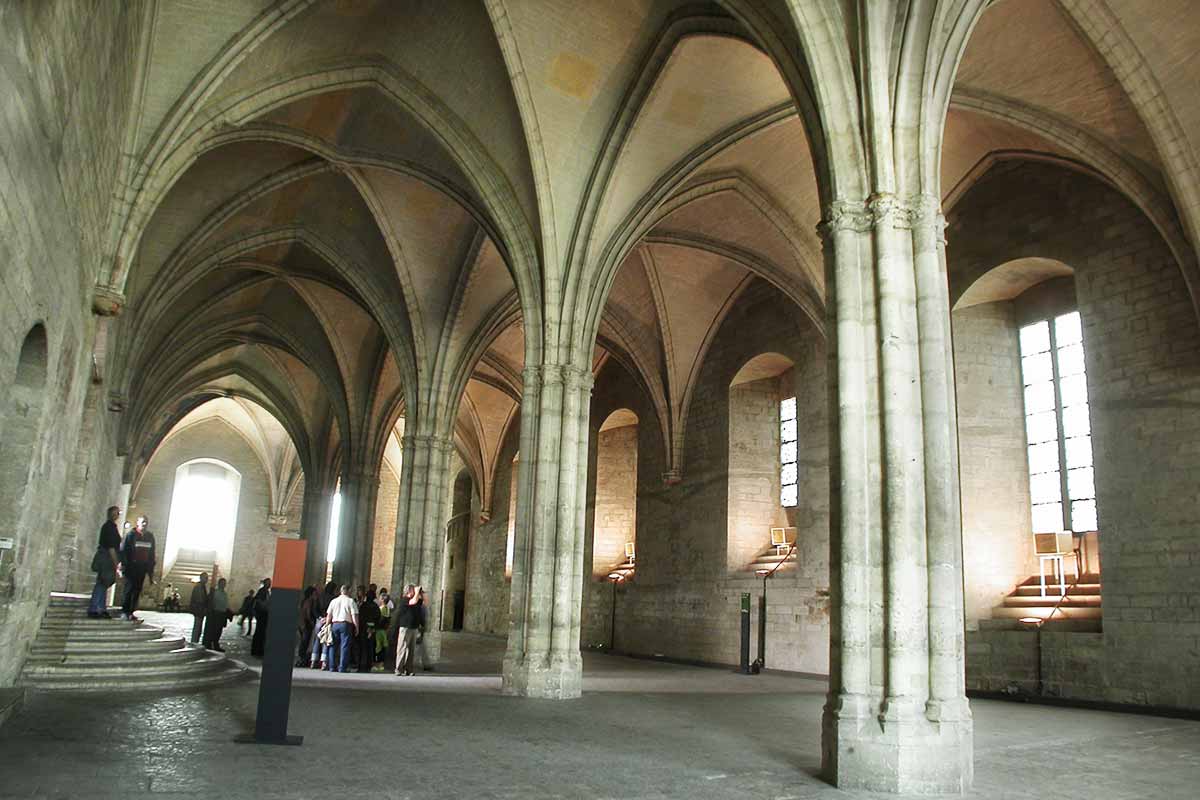 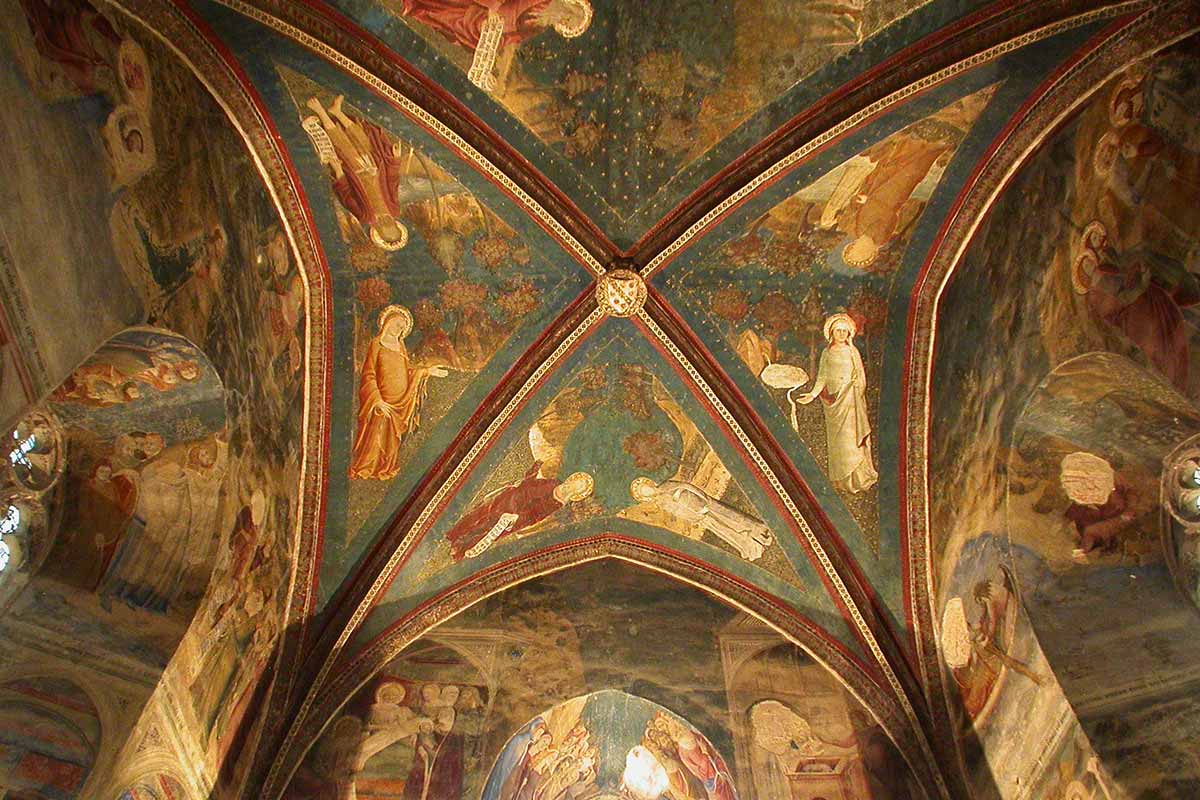 The Palace after the popes: the period of the Legates

The final return of the pope in Roma is followed by years of crisis, the "Western Shism" period. As Urban VI seats in Roma, his rival Clement VII settle in Avignon's Palace of the Popes. Benedict XIII succeeds him, he sustains in the palace fortress a 6 months siege and five years of seclusion. Benedict XIII is finally left by his supporters but his nephiew, Pedro de Luna, still sustains a 17 monthes siege in the Palace. After those tragic events, the palace is damaged. 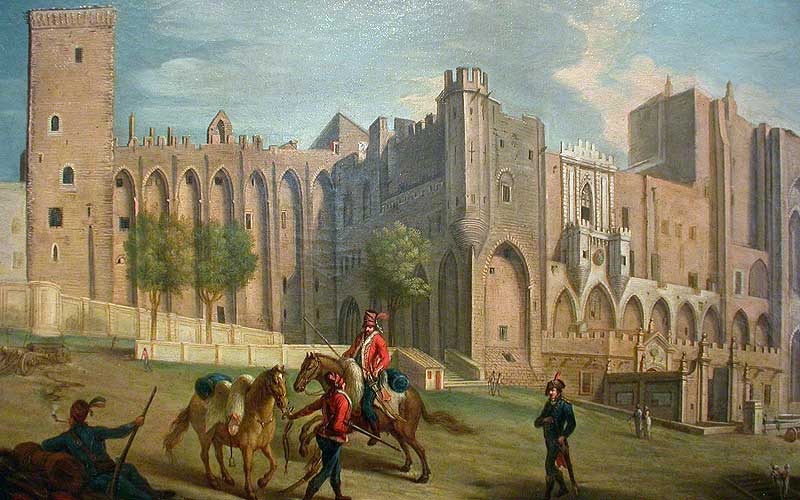 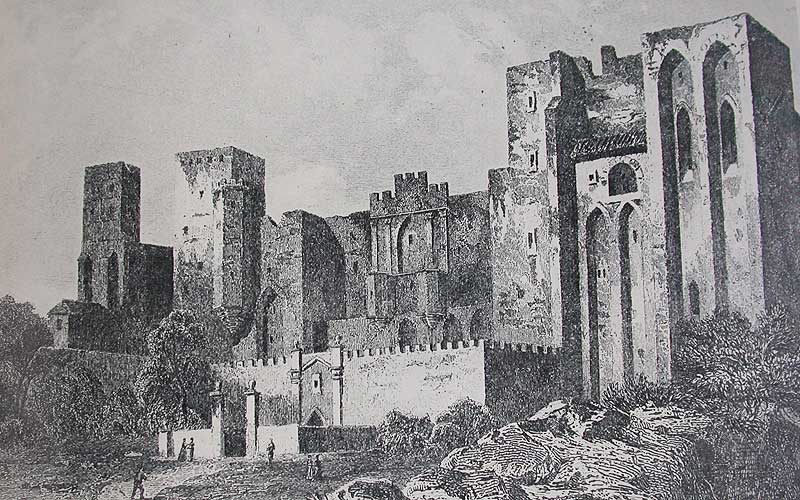 The Palace of the popes is renovated to house the legates and vice-legates who will stay there until the french Revolution. The Palace is maintained but suffers inevitably from ravages of time. Some parts are neglected, some are occupied by the Swiss Guard.

During the Revolution, the Palace is used as a prison. In its walls are perpetrated the "Glacière slaughter". It is even question to demolish the Palace, but hopefully the Napoleonic administration decide to use it as barracks. the Palace of the Popes shelters a Engeneering regiment. The soldiers save the palace from destruction but makes inside unfortunate modification.

The Palace of the popes is evacuated by military troups 1906. Begins then one century of renovation, under the direction of State Heritage administration.

Works give back to the Palace the imposing and majestuous shape it had when it was built.

The Cour d'honneur was built by the pope Clement VI, on the place of the previous "square of the Cancels". It is enclosed by the new buildings of the Palais neuf.

Theatre gave also its repute to the Palace of the Popes. The Cour d'honneur hosts every summer during july the main shows of the Avignon Festival. Exceptional exhibitions are also organized in the Palace.

In september 1947, Jean Vilar invests the Cour d'honneur of the Palace of the Popes with its actors for three performances. He comes back the year after, for 20 years, the Cour d'Honneur was the only one place for the Avignon Festival.

The Cour d'honneur is unlikely a place for theater, closed by the high walls of the Palace, in a imposing, even austere architecture, opened to bas weather and the caprices of the wind Mistral. The Cour d'Honneur can sublimate theatre or merciless crush on too fragile shows. Here the actors of Jean Vilar's troup : Gérard Philipe, Jeanne Moreau, Maria Casarès, marked the legend of the french Theatre.

Visit of the Palace of the Poes in photos : slideshow

The visit of the palace of the Popes consists in wandering trough the lage halles and rooms of the Palais vieux, the Grand Tinel, the Consistoire, the private rooms of the pope and its magnificent fresco getting by miracle through centuries to us, in the Palais Neuf the great halls of the Grand Chapel and the Petite Audience with their ribbed vaults.

A little museum, the "Musée de l'Oeuvre" explains and makes more lively in the mind of the visitor the Palace of the Popes at the times of its splendour : "the most beautiful and strongest house in the world".

From the Terrace on the tower, the view reaches Avignon, the Petit Palais and above across the Rhone river by Villeneuve and the "Kingdom of France".

Enjoy your tour of Avignon :