the Fountain of Vaucluse, source of the Sorgue, Petrarch's residence 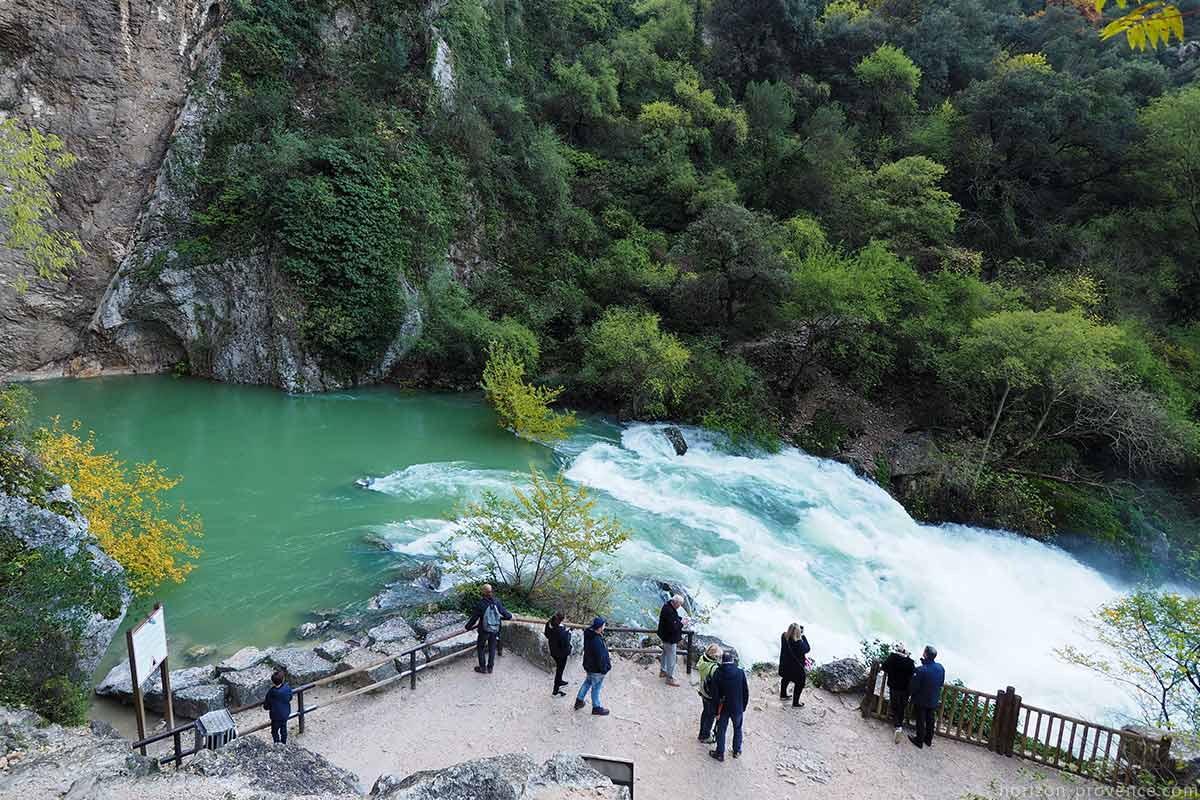 Exceptional flood of the Sorgue at Fontaine de Vaucluse at the end of November 2019, the water level of the resurgence reached +23.6 metres and a flow rate of 72 m3 per second, very close to the record of +23.8 metres (1994)!

The Fontaine-de-Vaucluse is an exceptional natural site: a narrow valley runs into the mountain and ends in a cul-de-sac, and at the top of a vertiginous cliff 230 metres high, a river rises from the depths of the earth with clear and abundant waters. This river called the Sorgue is a mystery, coming from nowhere it flows into the valley and flows into the plain in the shade of the plane trees, tamed by man it irrigates the fertile land to Avignon. Man has drawn his food from his fish-bearing waters and he has drawn hydrological energy from his current to develop his industries. Many mills had settled on the banks of the Sorgue. Even today, the river still makes the village rich: it attracts many visitors who come to go up its banks and observe the resurgence, the walk is easy, it is the most visited natural site of the Vaucluse. 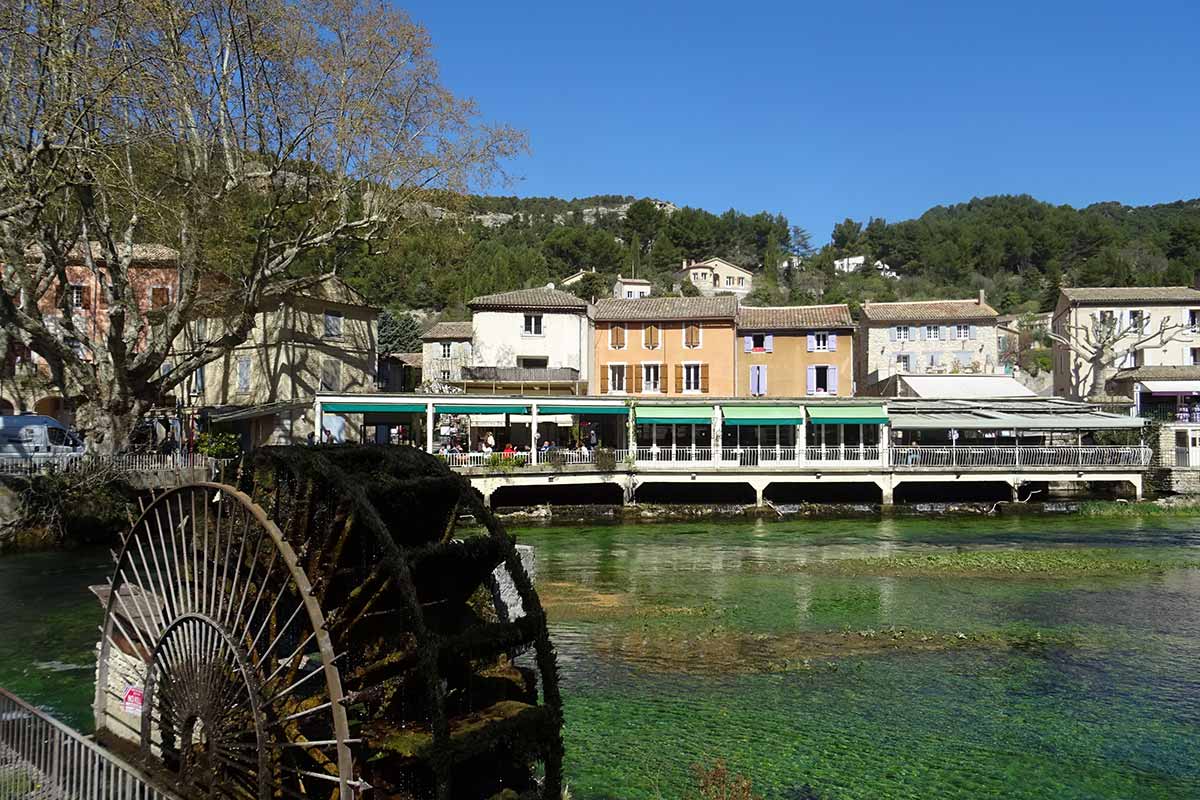 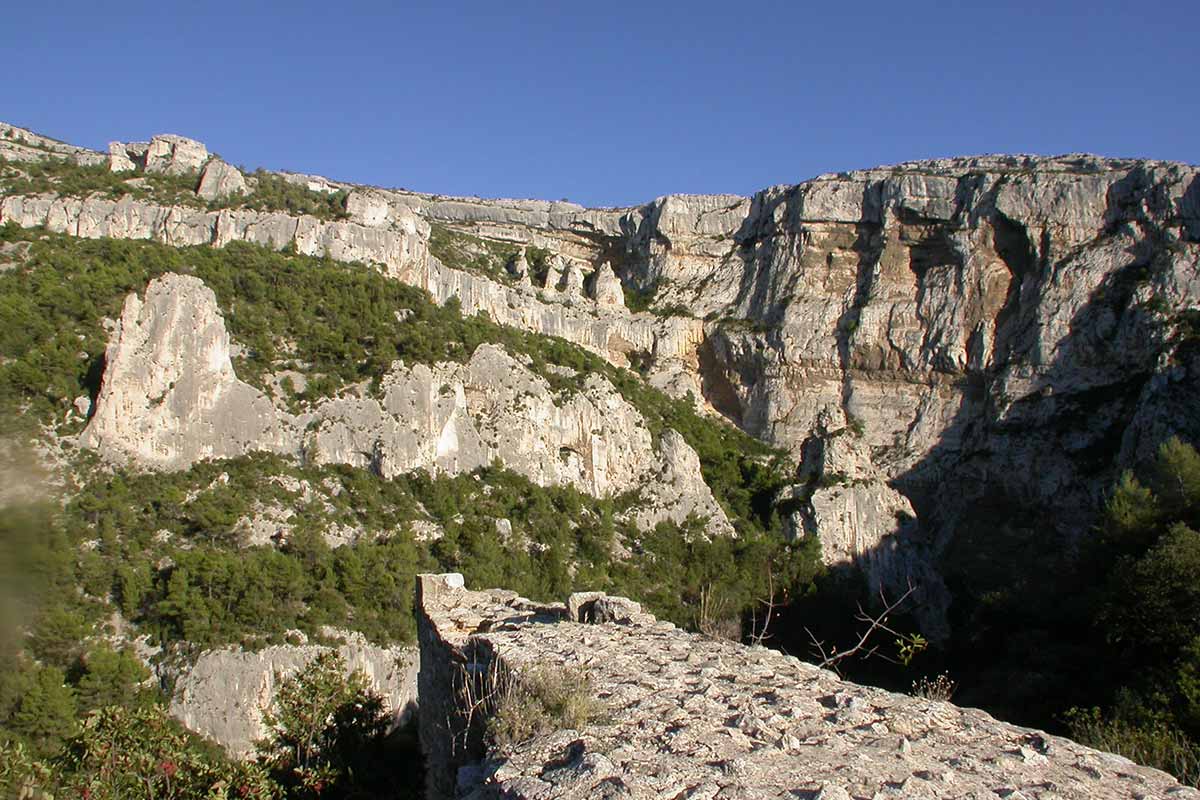 During low water periods, it is a cave dug at the foot of the cliff that opens onto a deep well where the level of stagnant water, measured by a "sorgometer", varies unpredictably according to the season. This abyss has always intrigued men, the Romans used to place offerings in the form of coins. In our time, a Marseilles diver reached -23 metres in 1878, a diver reached -30 metres in 1938, Commander Cousteau and his team reached -46 metres in 1946, -84 metres in 1955 and -106 metres with a "télénaute". The maximum depth of -309 metres was reached in 1985, without the aircraft being able to venture further into the galleries seen. The Norbert Casteret Museum of the Underground World and Caving retraces the history of these explorations. The source is an exurgence, the place appears as an underground river from rainwater infiltration. It is the first in France and the 5th in the world. The impluvium extends over 1250 km2, it collects rainwater from Mont Ventoux, the Sault region and the Albion plateau (for example the chasm of Le Caladaire near Banon), to Montagne de Lure.

When an intense rainstorm waters the catchment area of the Fontaine de Vaucluse, the water level soon rises to the point of overflowing the basin. The flow of water from the cliff is impressive. The sorgometer was installed in 1869, it is a scale of 25 graduated bars, divided into 4 sections. The overflow threshold is 21 metres, and the highest recorded flood was 23.80 metres in January 1994.

The Fontaine de Vaucluse site has been occupied since prehistoric times, the opposite would have been surprising. The Romans built a canal to collect the water from the fountain and transport it to Cavaillon and perhaps Avignon. La Fontaine was the place of a fervent cult: speleologists collected ancient coins inside.

The village community of Vallis Closa - the enclosed valley - is documented in the archives in the 10th century, a monastery housed the tomb of Saint-Véran. The fiefdom belongs to the bishops of Cavaillon whose ruined 13th century castle still dominates the village. The waters of the fountain drive many mills that allowed the development of the paper industry from the 16th century onwards. Vaucluse like Isle sur la Sorgue has an industrial activity. Electricity will take over the factories, the last paper mills closed in 1968. The "Vallis Clausa" paper mill perpetuates the ancestral know-how. 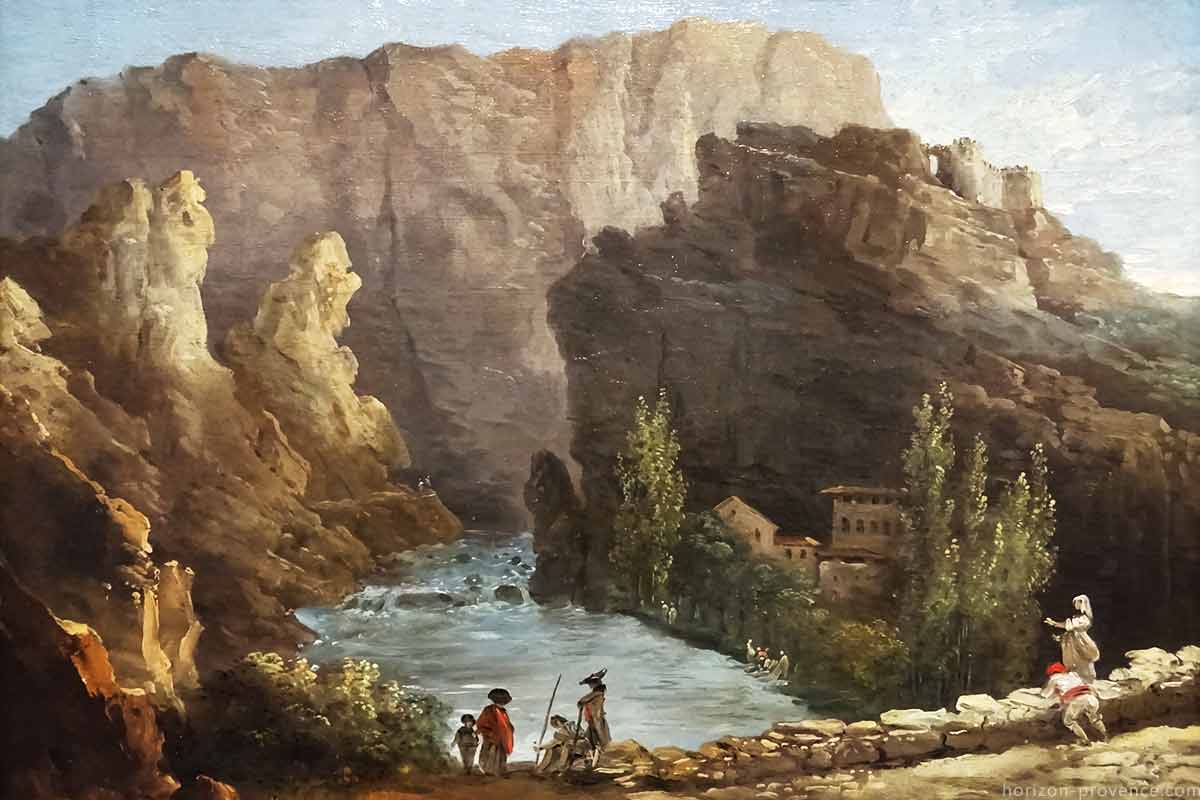 The village of Vaucluse gave its name to the department during the Revolution. Vaucluse comes from the word "Vallis Clausa" meaning simply Vallée Close. The village was called "Vaucluse-la-Fontaine", it changed its name to "Fontaine-de-Vaucluse" in 1946 so as not to confuse it with the name of the department.

This fortress, which controlled this place frequented by pilgrims, probably dates back to 1030. The feudal rights over the Vaucluse estate belonged to the bishops of Cavaillon, the most famous of whom was Philippe de Cabassolle, Petrarch's friend. The presence of the castle did not avoid the village sack by a band of bandits just after the poet's departure. 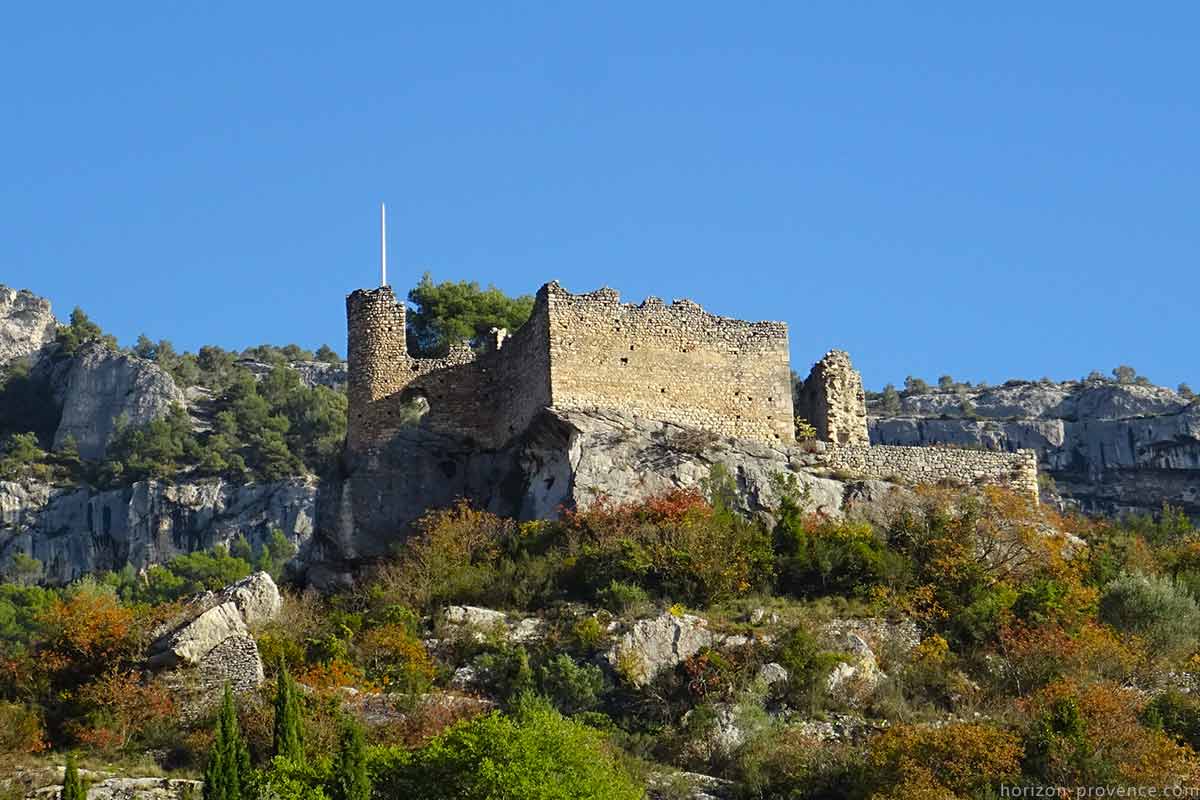 Near Fontaine-de-Vaucluse a large aqueduct blocks the valley and spans the road and the river. It was built in 1854-1857 to allow the Carpentras Canal to cross the Sorgue. It overlooks the river from 24 meters high, it has 13 arches for a length of 159 meters. It is the main engineering structure of the Carpentras canal, which irrigates the Vaucluse with the waters of the Durance taken towards Mérindol in the south of the Luberon, which it leads to the Aigues towards Vacqueyras. It is possible to take the path that follows the canal on the bridge and offers a beautiful view of the Sorgue valley.

The legend of Saint Véran and the Coulobre

Saint Véran is the patron saint of Fontaine-de-Vaucluse and an evangelizer of Provence. He was elected bishop of Cavaillon in 586 and legend has attributed many miracles to him. Saint-Véran's most famous achievement is his fight against the Coulobre, a monster living in a cave of the Fontaine-de-Vaucluse, a huge and stinking beast with red eyes, a large mouth with sharp teeth, covered with scales like shields, and swinging a large tail equipped with bone blades. Legend has it that Tarasque haunted the area around Tarascon. Saint Véran is buried in Fontaine-de-Vaucluse, his tomb is the subject of a pilgrimage attested in the 10th century. The parish church of Notre-Dame-et-Saint-Véran dates from the 11th century and contains the sarcophagus that collected the Saint's remains. His relics were transferred to Cavaillon in the church that took his name.

Francesco Petracco, known as Petrarca, was born in 1304 into an exiled Florentine family who came to Avignon to seek their fortune at the court of the Popes in 1312. He studied in Carpentras and then studied law at the University of Montpellier. At the Pontifical Court of Avignon, the young man befriended the powerful Roman family of the Colonnas. He is a young courtier, soon to be recognized as a poet and a man of letters. Petrarch met Laure de Noves in the church of Sainte-Claire in Avignon on June 6, 1327, Laure was the wife of Hugues de Sade, it was the beginning of a non-reciprocal and platonic love passion from 20 years, until Laure's death in 1348 during the plague epidemic. This romantic and sublimated love inspired him to write the 366 poems of Le Canzoniere, a collection passed down to posterity, written not in Latin but in "vulgar language". This work had a considerable influence on the history of literature. In 1328, fleeing the pomp of the papal court of Avignon, a city "sentinel of all vices", he found refuge near the Fontaine de Vaucluse and the castle of his very close friend Philippe de Cabassole, Bishop of Cavaillon. He stayed there for two years, working on his work, receiving friends, and walking in the surrounding hills. He left his holiday home as the "centre of his emotional and intellectual life" to travel to France, Germany and Italy. He campaigned unsuccessfully for the return of Pope Clement VI to Rome. He returned irregularly to his home in Fontaine-de-Vaucluse until 1351, to leave for Italy permanently. Shortly after his departure his house was looted and burned by bandits. After a long and busy life, he died in Arqua near Padua in 1374 at the age of 70.

Pétrarch and Laura portait , Venice school of painting, by 1510

[an error occurred while processing this directive] 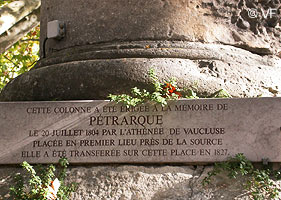 Bed and Breakfast in the surroundings of Fontaine-de-Vaucluse