The charm of Isle-sur-la-Sorgue, a little city in the Vaucluse, leaves none of its visitors insensitive. The Sorgue, a river flowing at the foot of the Fontaine de Vaucluse cliff, criss-crosses the city with its many arms and canals, earning it the nickname "Venice of the Comtat".

The heart of the city beats in the narrow and shaded streets, the facades of its venerable private mansions are reflected in the green waters of the Sorgue, in which the foam paddle wheels are slowly activated, reminiscent of a bygone industry. In the centre of the old town, the beautiful collegiate church Notre-Dame des Anges is the richest and most decorated baroque church in the Vaucluse. Antique dealers have elected it as their capital, Isle-sur-la-Sorgue is a paradise for hunters and flea markets, and it claims to be the third largest European market for flea markets and antiques. 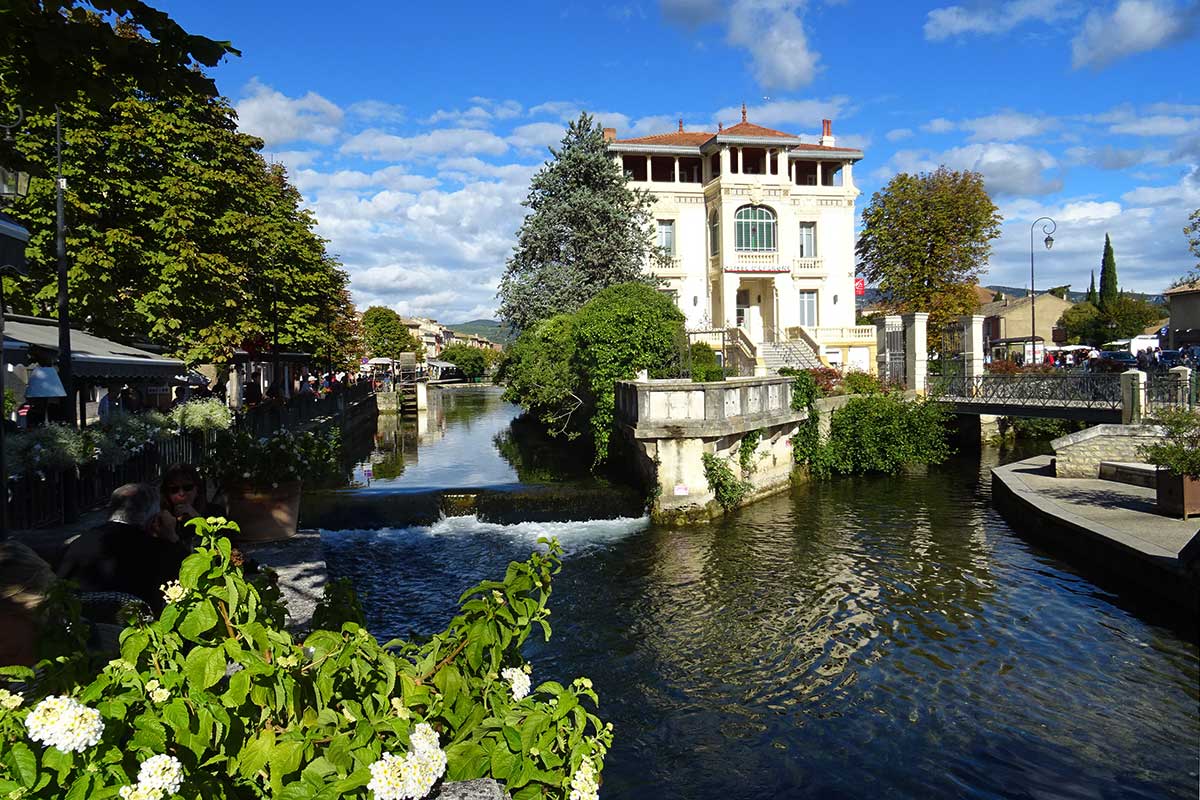 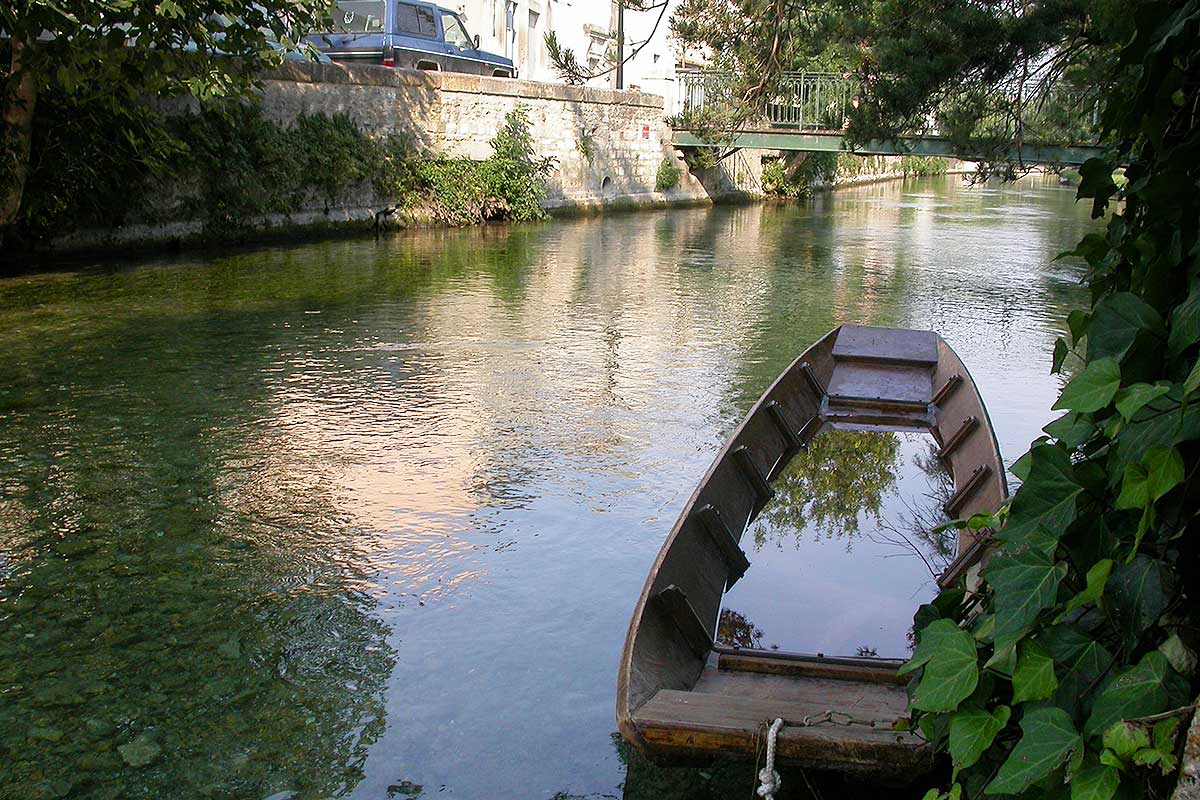 Water marks the history the aspect of the Vaucluse city from its origin, the name "Insula" appears during the High Middle Ages, it is then a hamlet of fishermen exploiting the resources of the clear and fishy waters of the river. The drainage of wet soils in the Middle Ages enhanced the rich alluvial lands of the surrounding area: the city grew and strengthened by surrounding itself with ramparts powerful enough to dissuade and repel the bands of road users who travelled through the region during the Hundred Years War, and the troops of the terrible Baron des Adrets during the Wars of Religion. The ramparts were demolished during the Revolution.

In 1237 the Count of Toulouse granted the inhabitants of "Insula" fishing privileges on the Sorgue River. The city was in fact almost autonomous, it adopted a consular regime, like the Commune of Avignon, which it kept until the Revolution. During the Revolution the moderate and conservative Islois took sides with the Girondins and the Fédéralistes against the Parisian revolutionaries. Isle sur la Sorgue was stormed by Jacobins' troops, looted and burned, and placed under siege until 1801. The town was named Isle-sur-la-Sorgue in 1890. 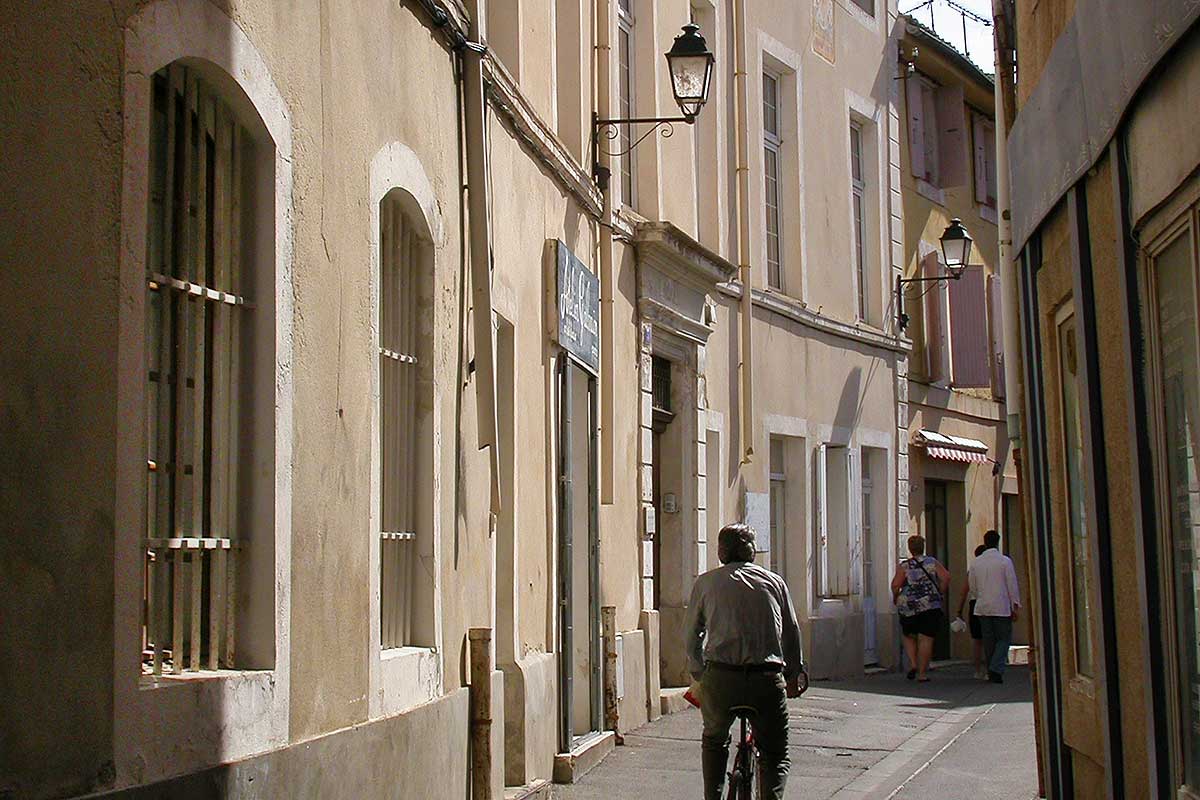 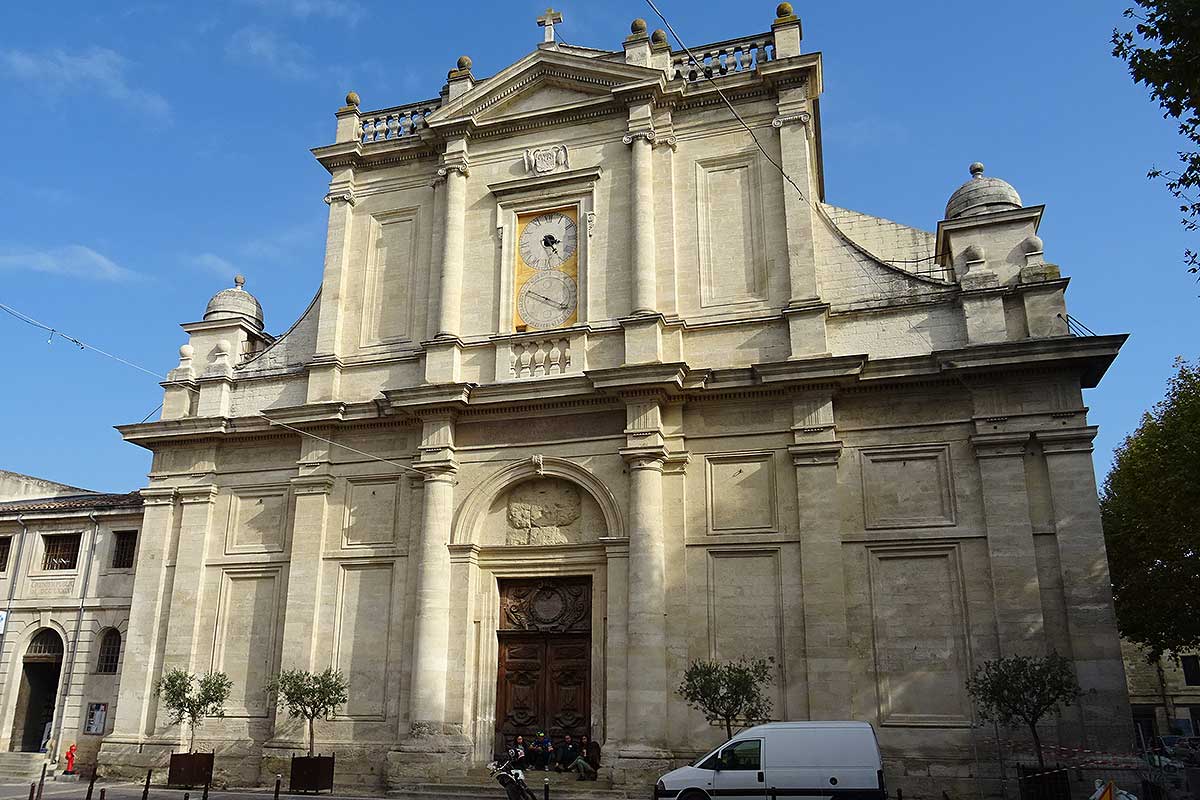 L'Isle sur Sorgue presents two faces : the gentle atmosphere invites you to wander through the streets of the old city, and let you rock by the murmur of the Sorgue river, or let you lost in the contemplation of the paddle wheels, and sit down in a Café's terrace. But it is also the walkabout and the Sunday morning animation, and the International Antiques and Second Hand Fairs, attracting connoisseurs from all over the world.

Hydraulic energy was exploited from the Middle Ages, and mills were installed on the arms of the Sorgue. The Industrial Revolution in the 19th century saw the use of paddle wheels and factories multiplying for silk spinning, dyeing, papermaking, grain and oil mills. The river provided the energy to drive up to 70 wheels in the 19th century. The activity of the small industrious city declined in the 20th century but the memory of this period is maintained by the people of Isère and remains alive, there are still 14 paddle wheels left. Today they have a simple function, but it is a fascinating sight: the heavy foaming blades, gorged with the clear water of the Sorgue, move slowly, and as they ascend, they glisten under the sun. 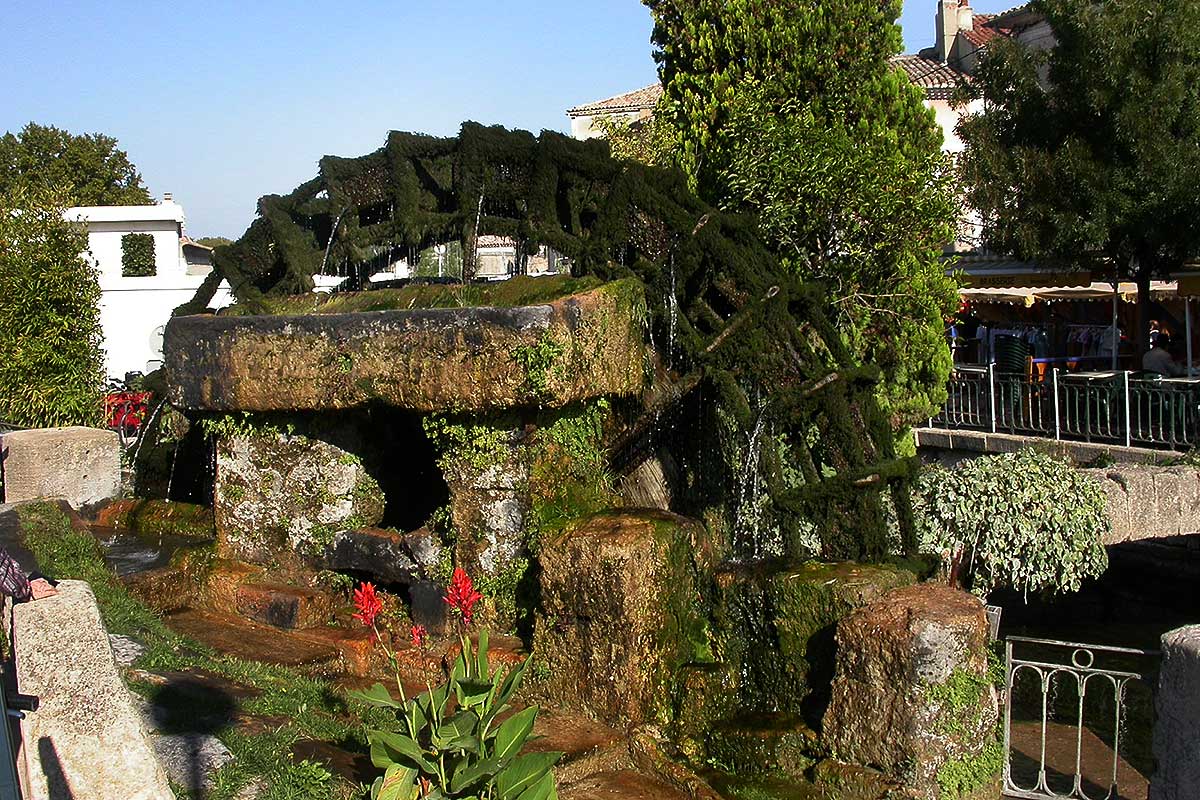 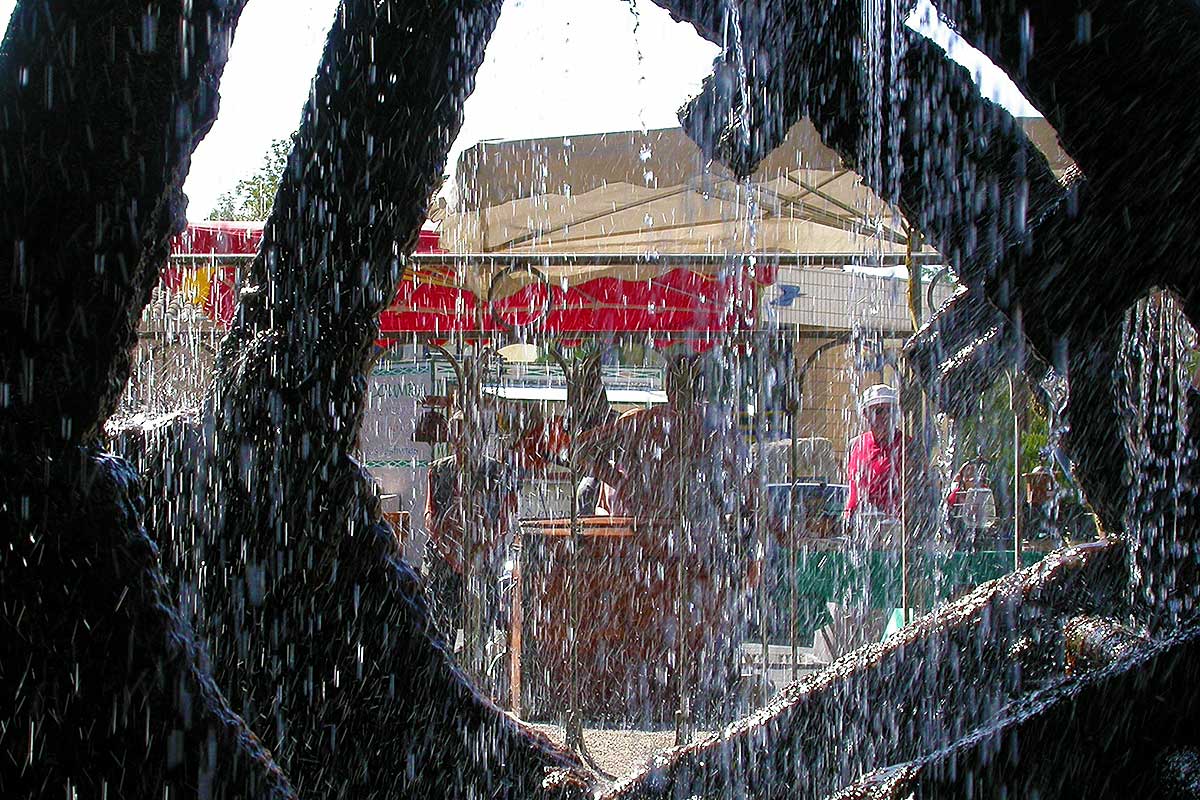 The industry has given way to tourism and flea markets. Today, L'Isle sur la Sorgue has two faces: the softness of the city encourages you to stroll, to let yourself be rocked by the murmur of the Sorgue or to contemplate the paddle wheels, sitting on the terrace of a café. But it is also the crowd bath and the hectic animation of its famous Sunday morning market, one of the most important in France. At Easter and Assumption, there are flea markets that attract enthusiasts from all over the world. Today, L'Isle-sur-la-Sorgue boasts the third largest antique trade in Europe. 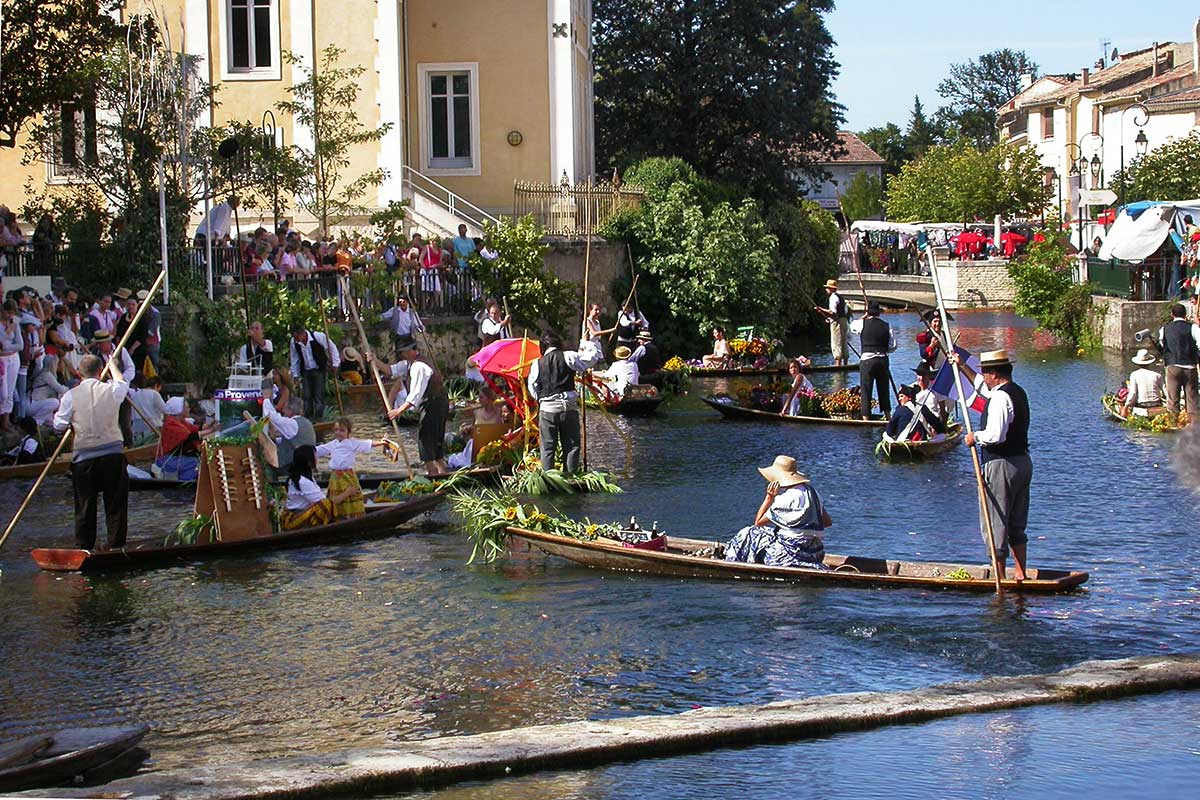 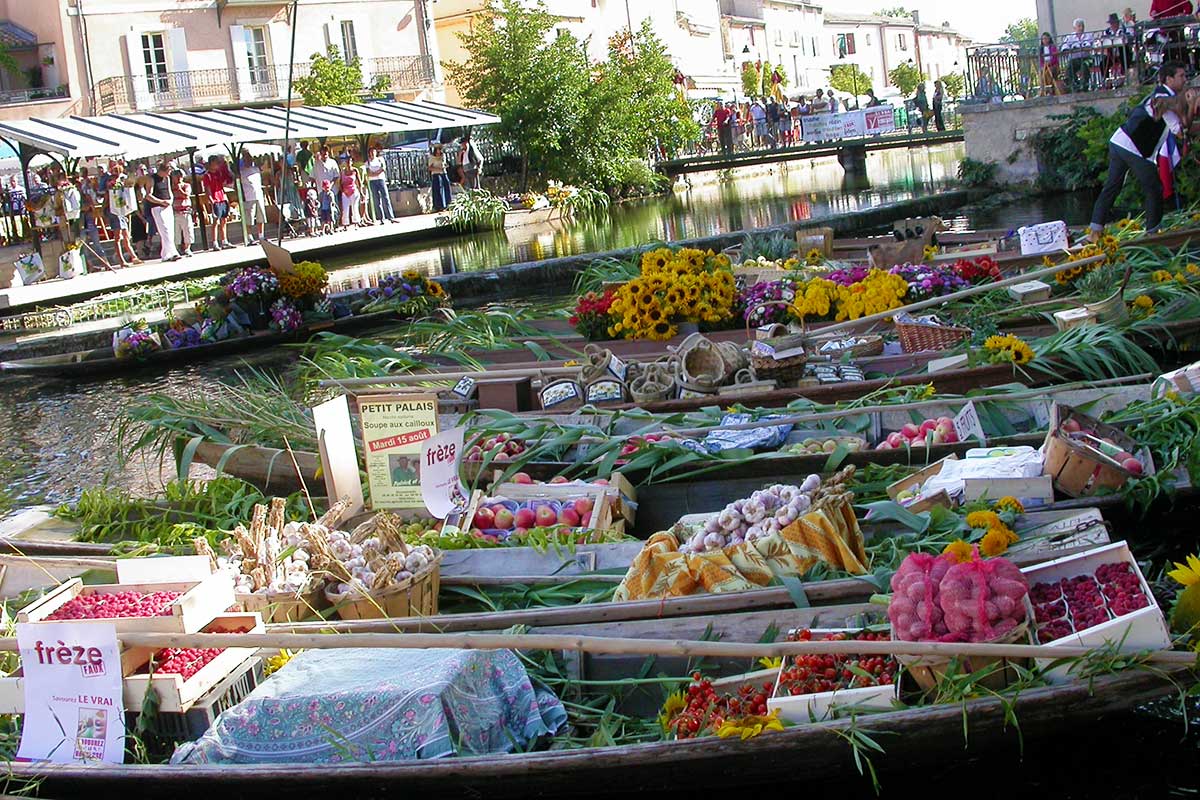 The floating market renew once a year with the time when the fishermen came to sell agriculture products to Isle sur Sorgue's inhabitants.

The traditional small boat with flat bottom, called "nego-chin" are out for the occasion, under the lens of hundreds of cameras. Local people are proud to show them and to offer their products to the crowd gathered on the river banks.

Gendarmes watch the curse of the vivid and joyful event.

The Sunday market in l'Isle sur la Sorgue is one of the most lively and colorful market in the region. It spreads on a big part of the town centre. It's a typical and lively market in Provence. We found there succulent local products and specialities. We can distinguish in the crowd langages from many european countries, proving the Vaucluse's city renown. 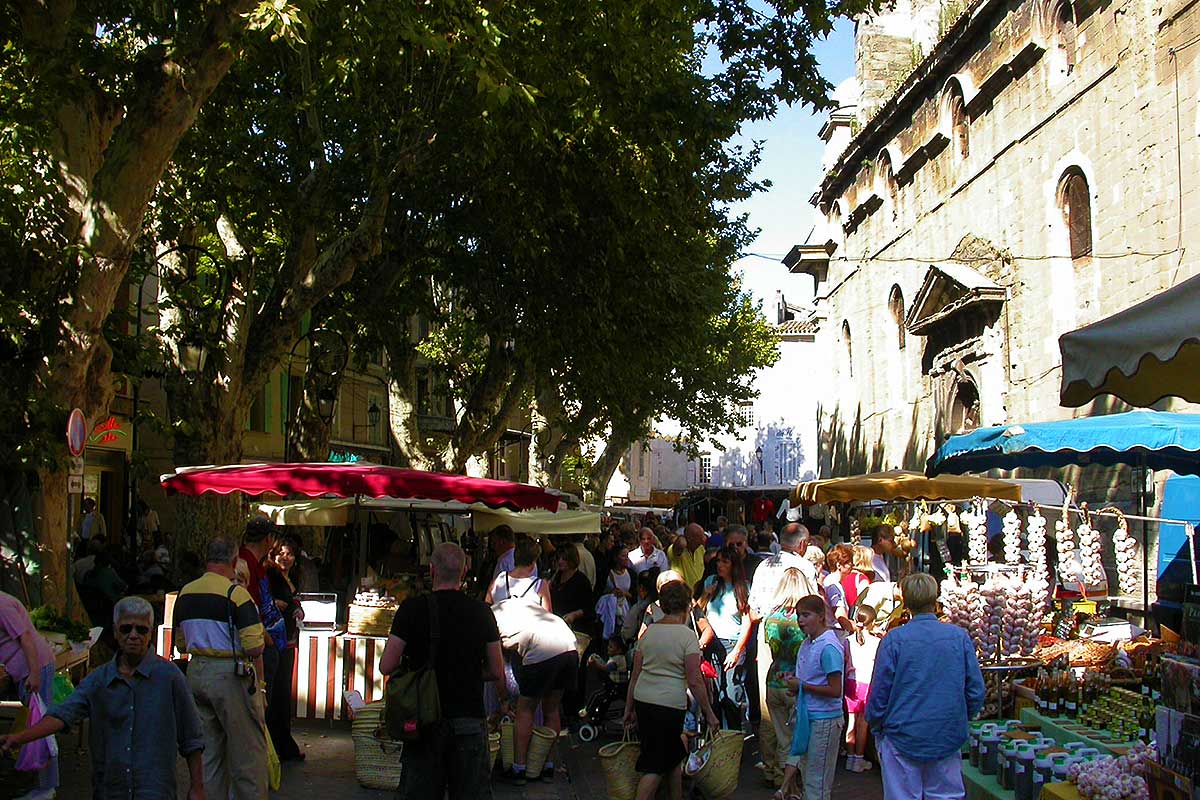 L'Isle sur la Sorgue has acquired an increasingly important reputation since the 1960s until it has become today the third European centre for the trade in antiquities after London and Paris.

The Easter, Pentecost, August 15 and All Saints' Day flea markets now attract hunters for antiques from all over the world. L'Isle sur Sorgue has set up a quality charter signed by the exhibitors. Amateurs can find expert advice at major events.

In parallel with the major fairs, many flea markets and antique dealers settled in Isle sur Sorgue, some grouped themselves into "antique villages", the first being the "Quai de la Gare" in the 1980s. There are also Decoration-Antiquity shops and Art Galleries that will satisfy the tastes of aesthetes. 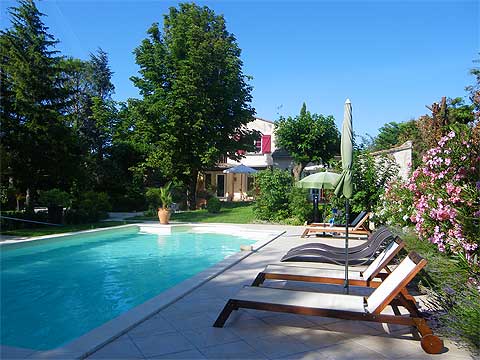 Home vacation rental on the shore of the river Sorgue in l'Isle sur la Sorgue.