Visit of the village and its castle, the Cellars of the Palais Saint Firmin, the Village des Bories, Saint Pantaleon 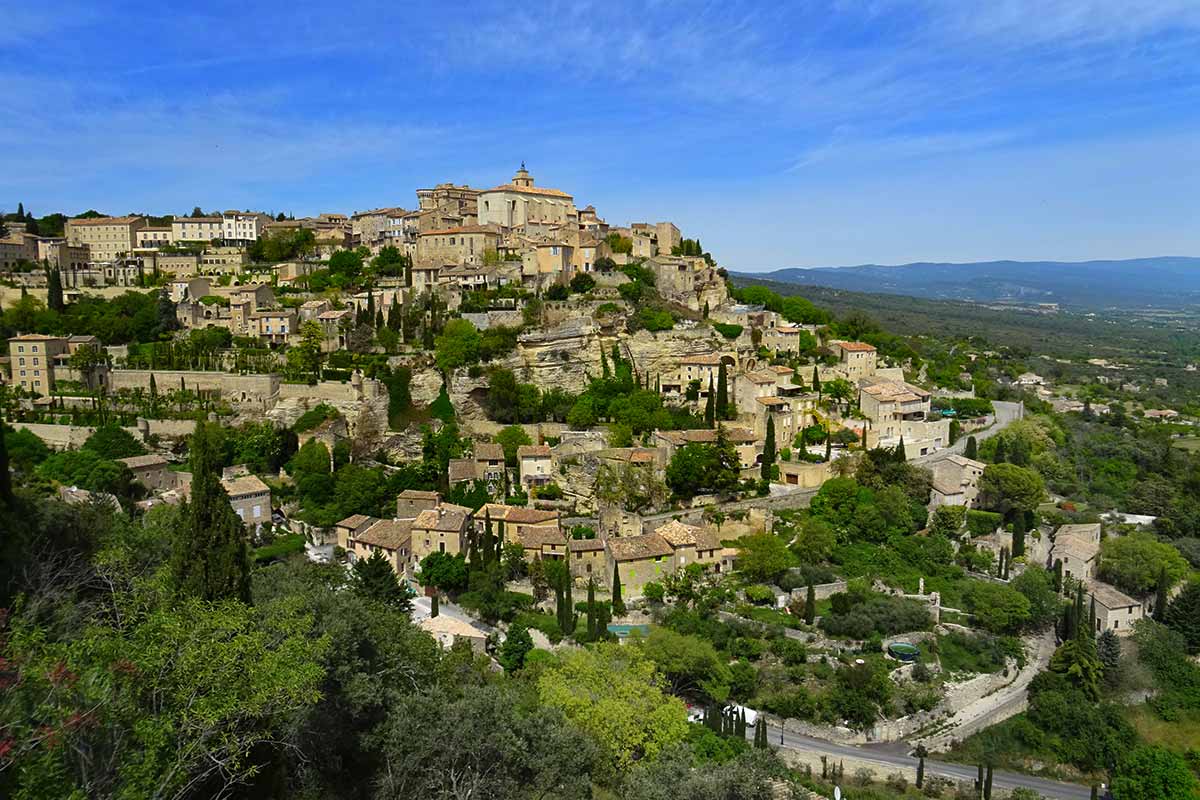 Gordes is an emblematic village of Provence. Perched on an advanced foothill of the Vaucluse mountains, it overlooks the Calavon valley and faces the Luberon massif. It appears under Provençal light like a mineral citadel, a "village acropolis" whose limestone stones burn under the rays of the setting sun. The flat limestone buildings here achieve a technical refinement and form a sensational harmony with the landscape. Gordes is naturally classified among the "most beautiful villages of France" and the favourite villages of the French.

Gordes and the artists

Painters and photographers sensitive to the mineral beauty of the place have "discovered" Gordes and established the reputation of this village. The first arrived after the Second World War: Marc Chagall, Jean Deyrolle and André Lhote had set up an artist colony in Gordes. The painters Victor Vasarelly, Victor Spahn, Pol Mara, the photographer Willy Ronis, among others, have associated their prestigious name with the village. Today, Gordes still houses the workshops of painters, sculptors and ceramists who draw their inspiration from this place, and their exhibition galleries are open to the public.

With fame, the economy of the once agrarian village has turned to tourism and today a multitude of visitors who pass without stopping for a long time, taking the time to take only a few photos. Lying in Gordes, you will appreciate the charm of an old Provençal village with a thousand-year history and you may be able to meet one of the many well-known personalities from the entertainment world who have chosen this place as their holiday destination.

The centre of Gordes is occupied by a rectangular castle built in 1525 on the site of a previous feudal castle. It is Renaissance in style but retains its medieval appearance and its function as a fortress in times of turmoil caused by the wars of religion. The castle is now a peaceful museum, it has housed for 30 years a museum dedicated to the works of the painter Vasarely, famous inhabitant of the village, then to Pol Mara, the Flemish painter also Gordian by adoption. It now offers a different exhibition each year starting in April.

The old village is criss-crossed by steep calades, steep alleys at the bend of which you can admire a beautiful panorama over the Luberon and the Cavalon valley. The church of Saint Firmin is of Romanesque origin, redesigned in the 17th century. Saint Firmin (Bishop of Uzès, died in 552) is the patron saint of Gordes. Before the redesign of the church, the 14th century square bell tower with a bell tower was a belfry and a watchtower.

There are many art galleries and artists' exhibitions in Gordes. An open-air theatre hosts the Soirée d'été de Gordes, an open-air summer festival, in a natural space carved in stone.

In the hollow of the valley on an esplanade away from busy places is the Fontaine Basse (Lower Fountain), a fountain-washer indicated since the 15th century. It collects water from springs that pass under the cliff. For a long time it was the living heart of the city, a very lively place. In the Fontaine basse district, which is fed by a watercourse, mills were set up, it was the district of factories and workshops, where many craftsmen lived.

The rocky promontory was occupied at the arrival of the Romans by a castrum of the Vordenses, a Celto-Ligurian tribe federated to the Cavares whose capital was Cavaillon. The Vordenses probably gave their name to the village (Vordenses - Gordenses - Gordes). Gordes appeared in the annals in the 11th century, with the construction of a first feudal castle occupied by a lord. The village developed and fortified with ramparts that effectively protected the city during the unrest of the 14th century.

Bertrand Rambaud de Simiane (1513-1578), from the powerful Provençal family Simiane d'Agoult, inherited the seigneury of Gordes. He is called the Baron de Gordes, he is a great personality of his time, nicknamed by his contemporaries "the French Epimanondas", he is adviser to the King of France, a strategist and a valiant warlord who distinguished himself during the Italian Wars, and against the armed protestant troops of Charles Dupuy de Montbrun whom he captured in Dauphiné. Bertrand Rambaud de Simiane transformed the Château de Gordes to give it its current appearance, a Renaissance-style building that crowns the village, still retaining a defensive function.

In the 17th and 18th centuries, Gordes had 3000 inhabitants, most of them peasants and industrious and dynamic craftsmen. The village overflows its ramparts which are no longer maintained. In the 19th century, about fifty inhabitants of Gordes joined the republican forces against the coup d'état of Louis-Napoléon Bonaparte in 1851. Earthquakes in 1887 and 1909 destroyed houses in the village.

The Vaucluse plateau around Gordes was an active centre of the Resistance during the Second World War, on 21 August 1944, the village was bombed in retaliation by the German army, houses were destroyed, twenty inhabitants were killed. Gordes was awarded the War Cross with a silver star in 1948.

With the rural exodus in the 19th century and the considerable human losses of the First World War, the population of Gordes fell to less than a thousand inhabitants. But from the 1960s onwards, tourism revived economic activity. The village's abandoned houses were renovated, leading to a steep rise in real estate prices. The village of Gordes and its surroundings nowadays are home to rich villas and some luxury hotels.

The Castle of Gordes

The imposing castle that covers the perched village was built by Bertrand de Simiane in the 16th century, in place of an 11th century feudal castle, of which he has preserved two towers visible on the north façade. The castle was never inhabited by its rightful owners, the Marquises of Simiane, the Dukes of Soubise and in the 18th century the Princes of Condé were prominent figures who lived near the royal court, and were content to collect the income from their fief. The Château de Gordes was spared during the Revolution. It contains a superbly decorated Renaissance style fireplace, and from the walkway over the rooftops the view embraces a magnificent panorama of the Luberon massif and the Calavon valley.

At the end of the 1960s, the painter Victor Vasarely bought the decrepit castle for a symbolic franc and ensured its restoration. A museum housing his works was inaugurated by President Georges Pompidou in 1970. Through his action and his interpersonal skills in the Parisian cultural world, Vasarely has ensured the reputation of this village, which has only grown to become an icon of Provence. Victor Vasarely is the father of Op Art, a very influential movement during the 1960s that brought fashion, architecture, urban planning and music behind him.

The Cellars of the Palais Saint Firmin

The Palais Saint-Firmin is one of the most beautiful houses in the village, in Renaissance style, damaged during the Second World War and restored at the end of the 20th century by private owners, who discovered an unusual space under their house: a maze of cellars and pipes carved in limestone extending over seven levels. They were once used as a workshop, chapel, bread oven, oil mill, grain silo, cisterns or sheepfold. A semi-troglodyte industrial and artisanal activity was taking place under the surface of the village. After many years of excavation and restoration, the cellars of the Palais Saint-Firmin opened to the public in 1999.

Stone is omnipresent in the landscape around Gordes. Limestone outcrops everywhere, whitened by the sun and bad weather, on which hangs a scented garrigue of the intoxicating scents of Provence.

Some of the most beautiful bories - shelters and dry stone huts - in Provence are found in the vicinity of Gordes. Testimony of an agrarian civilization with roots in prehistoric times, there are bories scattered throughout the Gordes region, in the Vaucluse plateau, the Luberon and Haute Provence.

The Village des Bories is located 4km below Gordes, discreetly located in the oak forest, at the mouth of the Sénancole valley. It is an open-air museum, consisting of 29 buildings built exclusively by stacking dry stones, without mortar: huts, sheepfolds, ovens, barns, silkworms and houses. The construction technique known since prehistoric times has reached a peak of know-how here. It is a wonderful witness of the Provençal agricultural civilization.

The village locally known as "Les Cabanes" or "Savournins Bas" was formed in the 17th and 18th centuries. The lack of arable land forced farmers to clear new land that was less suitable for agriculture. With simple flat stones (Burdigalian limestone) removed from their fields they built terraces (retaining walls), low walls, shelters and increasingly elaborate buildings. The interior comfort was very basic, the houses were probably not occupied all year round. It was abandoned in the 19th century.

Another icon of Provence, the Abbey of Sénanque is a few kilometers away following the hiking trail that goes up the valley of the Sénancole.

The Necropolis of Saint Pantaleon

At the foot of Gordes is the small village of Saint Pantaléon, a small village not much bigger than a hamlet. Its church is a curious building, old with a composite appearance. It dates from the 11th century, then was altered in the 12th century and enlarged after the plague of 1720, and at the foot of the church there is a rock necropolis. Tombs are sarcophagi dug into the rock, some of which are very small. The church of Saint Pantaleon was a sanctuary of respite, a sacred place where stillborn children were baptized, a ritual supposed to bring them back to life during the ceremony before the final departure for Paradise.

Accommodation and activities in Gordes and nearby

Things to see and do in Gordes:

On the territory of Gordes

map of Gordes and Provence