Caumont-sur-Durance and the Bonpas charterhouse

The village of Caumont sur Durance is located between Avignon, Cavaillon and l'Isle sur la Sorgue. The old village is located on a large hill facing the Durance river which borders its territory to the south. The discovery of the remains of a rich Gallo-Roman villa testifies to the age of human occupation. Because the place is strategic, there was a ferryboat nearby, in Bonpas, which allowed the crossing of the Durance, a capricious river once feared. The Chartreuse de Bonpas was established there in the 12th century on the site of an ancient Roman oppidum.

The old village of Caumont-sur-Durance

The old village of Caumont, built on the hillside, was protected from the flash floods of the capricious Durance. The church that dominates it preserves the tomb of Cardinal Philippe de Cabassole (1305-1372), Petrarch's great friend. The village has kept its old aspect and has some remarkable monuments.

The village with its narrow streets has kept its picturesque Provençal aspect. There are still important remains of 14th century ramparts, including the "Newer, more recent (18th century) Gate. The parish church and its bell tower that points above the village is from the end of the 18th century.

Climbing the hill allows you to enjoy a wonderful panorama, the plain of the Sorgues region, the Vaucluse mountains, then the Luberon massif stands out clearly, separated from the Alpilles by the Durance valley, a very important communication route

The village has, with the Saint-Symphorien chapel, built in the middle of the 12th century, a beautiful example of the second Provençal Romanesque period. Below it, a Roman garden was renovated in 2006, near a rich Gallo-Roman villa on which it was once an outbuilding.

Agricultural activity is predominant around Caumont, the vines on the hill produce grapes for the Côtes du Rhône, the orchards cover the plain of the Durance. 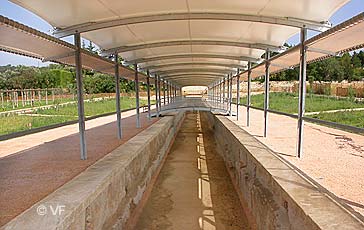 During prospecting work in the village of Caumont, archaeologists discovered the basin of a rich Gallo-Roman villa 65 m long, 3.20 m wide and 1.20 m deep, it is a major archaeological discovery. It is the largest basin of amenity discovered in Gaul.

By staging a plant scene, the designers of the Roman Garden of Caumont wanted to evoke the luxurious Gallo-Roman villa and its opulent garden that was located on this site 2000 years ago..

We are near Via Domitia, the road that linked Italy to Spain via Provence. In Caumont was built a real rural palace, a rich villa with a lush garden and a magnificent view of the Luberon.

Opened since July 2006, the garden is distributed in thematic plantations dedicated to the gods of Roman mythology: Apollo, Jupiter, Minerva, Bacchus, Ceres, Flora, Diana, Hades. A room has been set up where the archaeological objects found on the site are displayed, evocative of the past splendour of this luxurious residence.

The Chartreuse de Bonpas is a 12th century fortified medieval monastery built at the foot of a hill overlooking a ford on the Durance.

Legend has it that the place, then called "Maupas" (bad passage) was infested with robbers. A pious man, Sibertius settled here with some soldiers and built a chapel. He chased away the bandits and the secure ford was renamed "Bonpas".

Pope John XXII of Avignon sold the building to the Carthusian monks in 1318. Over time, the monastery prospered and acquired many surrounding lands. In the 17th century it was an important local economic player.

The visit of the monument traces the evolution of the Chartreuse de Bonpas, from the construction of the chapel around the year 1000 to the flourishing business run by the Carthusian monks. A pretty French-style garden was laid out on the upper terrace of the monastery by subsequent occupants, with a splendid view of the Durance valley. The visit of the Chartreuse de Bonpas is a fun space: animations with sound and light, and a short film bring us back to life the history of this place.

Selection of guest houses around Avignon on the portail of the bed and breakfast in provence.

Things to see and do in Caumont-sur-Durance