The village, the wine AOC Ventoux, cycling the Mont Ventoux 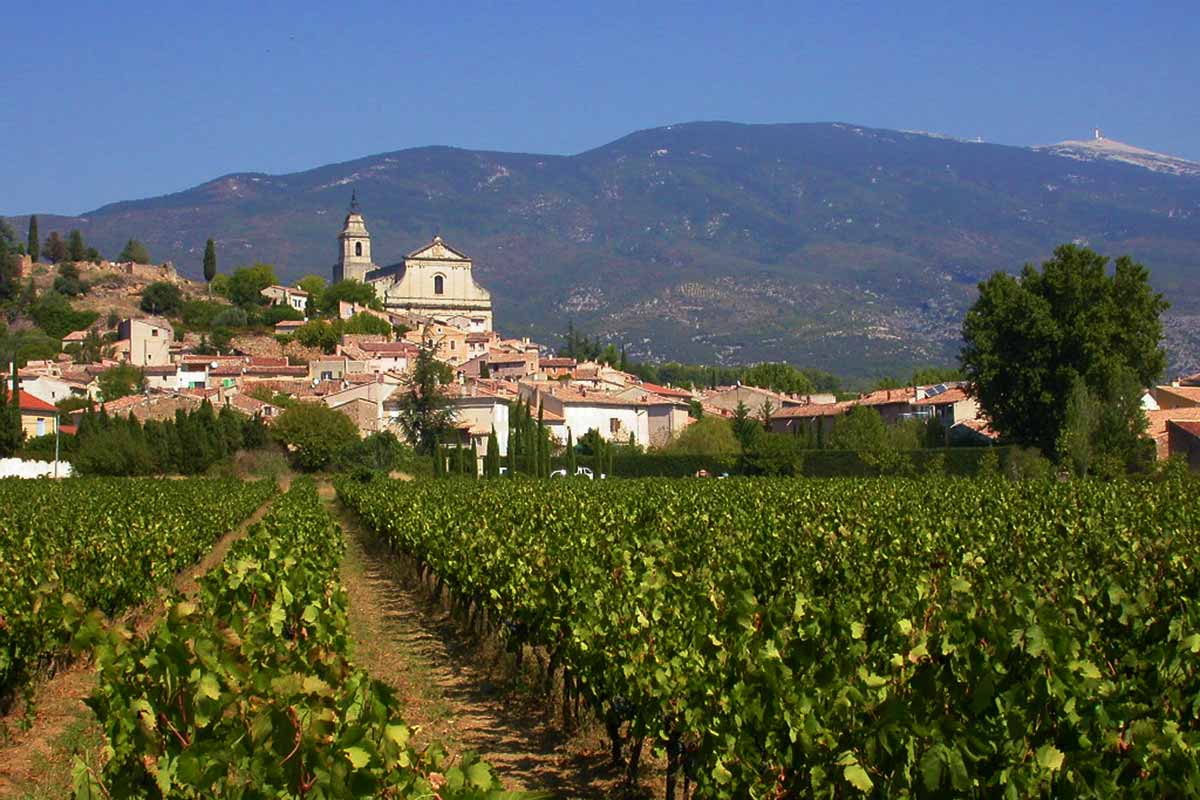 Bédoin, Provencal village at the foot of the Mont Ventoux

The village of Bédoin is camped on the hill of Mourre Redon, whose height seems very modest in front of the imposing mass of the "Géant de Provence" which fills the landscape in the background.

Bédoin is a lively and colourful village, with streets dotted with fountains and two washhouses. The Jesuit style Saint-Pierre church, built at the top of the village, dates back to the 17th century. In the Middle Ages a seigneurial castle stood at the top of Mourre Redon, it was abandoned in the 15th century, and there is no trace of it today. Its location is now occupied by the cemetery next to St. Peter's Church. There are still some remains of the ramparts in the village that survived the extension of urban planning in the 19th century. The village is watered by the Mède, a river that flows down from Mont Ventoux.

The surrounding landscape is dominated by the cultivation of vines and cherries. The territory of Bédoin is dotted with hamlets, there are about twenty of them in the hilly and diversified territory. The hamlets of Les Baux or Sainte Colombe are real small villages with their church, their washhouse, their fountain and their old school.

Many rural chapels are spread over the territory of Bédoin. The Notre-Dame de Moustier chapel is located a few hectometres east of the village on a promontory. It is a 12th century Romanesque building, destroyed during the Wars of Religion but spared by the revolutionaries. The Romanesque chapel of La Madelène, on the road to Malaucène, has been a sacred link since Gallic times. The Beccarras chapel on the Flassan road recalls the tragic events of the Bedoin Revolution, the Chapel of the Holy Cross on the summit of Mont-Ventoux is also on the territory of Bedoin.

History of Bédoin, a martyred village of the Revolution

The human occupation of the territory of Bédoin is very old, the slopes of Mont-Ventoux offered secure shelters above the marshy plain which extended as far as the Rhône. Flint tools from the Paleolithic period and Neolithic pottery have been found in the soil of the town. The Roman occupation made it possible to develop the territory, a vast Gallo-Roman villa (1000 m2) was discovered near the hamlet of Les Bruns. The village is mentioned in 998 in a donation from the lord of the place named Ismidon to the Benedictines of Montmajour. The toponymy of Bedoin is difficult to establish, but it certainly has nothing to do with Bedoin from Africa or the Middle East. The name can be of Germanic origin.

Bédoin was devastated in 1562 by the soldiers of Captain Mouvans, a lieutenant of the Marquis Charles du Puy-Montbrun during the Wars of Religion. Bédoin was taken again the following year by Gaspard Pape, Protestant lord of Saint-Auban in the Drôme.

At the end of the 18th century the village had about 2700 inhabitants. The Revolution occurred, and the Comtat Venaissin was annexed to France in 1791. Bédoin is a centre of conservative reaction, the village is home to refractory priests, and it is nicknamed "Vendée du midi". On the night of 12 to 13 May 1794, the freedom tree planted two years earlier was pulled out and dragged out of the enclosure. The investigation conducted by the members of the Republican City Council has yielded no results. On the 15th of October, Maignet, the representative of the Comité de Salut Public, arrested the village population. Unable to obtain a confession, he set up a court that sentenced 63 inhabitants to death who were shot or guillotined. "Bedoin the infamous" was rid of its inhabitants, its houses destroyed and burned, the village was wiped off the map, its territory was shared between the liitrophic communes. The Revolutionary Terror ended on 9 July 1794 with the arrest of Robespierre and his execution the following day.

Cycling the Mont Ventoux via Bédoin

For every amateur cyclist sport, the ascension of the Mont Ventoux is the climax of the Tour de France. It is the dream of all cyclists to climb the difficult slopes of the Mont Ventoux. The road by Bedoin is the toughest and the most prestigious. When the Tour de France passes through Mont Ventoux, the stage is the highlight of the race. Climbing the steep slopes of the Giant of Provence, reaching its summit is the dream of every bike enthusiast, so that as soon as the weather allows, from May to September, they go by the thousands to Bedoin to undertake the ascent. Three routes lead to the summit of Mont-Ventoux: from Malaucène, from Sault, but the ascent of Mont Ventoux by Bédoin is considered the most difficult and prestigious.

In the village of Bedoin, a line on the road indicates the start of the 21.6 km climb. The first kilometres up to the hamlet of « Les Bruns » are easy, the road follows the foo of the mountain, offering a superb view of vineyards and the Mont Ventoux.

At the Saint Estève curve, the serious stuff really begins : the road winds up in the forest along the rocky combs, rising on a 10% slope for 9km. Quickly with the effort, the heart races, legs stiffen, each push on the pedals demands will power and determination … with no rest, after each bend, the road still climbs on mercilessly.

At the Chalet Reynard (alt 1440 m), the road leaves the forest, and provides san opportune respite before entering a lunar landscape, a desert of limestone, bleached by the sun and the wind. The slope is not so great (about 7%), but with the altitude the party !

The road follows the curves of the mountain, the emotive memorial of Tom Simpson’s stele at the right indicates the end just 2 km, those are the hardest, but the proximity of the summit helps to overcome the pain.

The last bend : do not hope it’s becoming easier at the end ! The satisfaction of reaching the summit soon banishes of the past few moments. The ascent of the Mont Ventoux by bike will create an unforgettable memory in a tribute to this rare place of natural beauty.

Climbing the Mont-Ventoux by bike is not a benign effort, a good pre- training is essential. Firefighters must intervene several times a year for serious ailments and each year counts its number of deaths. It takes less than 1.5 hours for the best to reach the top, and more than two hours for most cyclists. To reach the summit in good conditions, it is necessary to start from Bedoin early enough in the summer to avoid the hot weather (before 9am) and postpone the ascent if the wind is too strong.

The most sporty cyclists can try to join the very select club of Les Cinglés du Ventoux (The Ventoux freaks) , on the sole condition that they climb to the summit of Mont-Ventoux by its three access roads: Bédoin, Malaucène and Sault on the same day, i. e. 4400 m of altitude difference over 137 km. The really stronger and resistant ones who have the energy to make an extra ascent are entitled to the title of Galerian, while the Bicingles (twice freaks) who double the Crazy Challenge are much rarer. Candidates must stamp a card at merchants in the three villages to validate their title.

Bédoin is an important centre for the production of an AOC wine "Ventoux", a sunny wine with a southern character, to be discovered and tasted in the cooperative cellar and among local winegrowers. The vine has been present on the territory since Gallo-Roman times, amphoras for wine from the 1st century BC have been found in Mazan. There are written traces of the presence of the vine as early as the 9th century. The AOC Côtes-du-Ventoux was obtained in 1973 by the syndicat des vins du Ventoux, it changed its name to AOC Ventoux in 2008. Its vineyard extends over the western and southern slopes of Mont-Ventoux, from the Dentelles de Montmirail to the Vaucluse plateau to Goult and Apt in the Calavon valley where it borders the AOC Luberon appellation wine.

The mountain shelters the vines from the violent gusts of the Mistral which clears the sky and provides from 2600 to 2800 hours of sunshine per year. The soil is composed of sediments and the degradation of the Cretaceous limestone substrate.

Red and rosé wines are blended from Grenache noir, Syrah, Cinsault, Mourvèdre and Carignan grapes, with Picpoul noir and Counoise as secondary grape varieties (limited to 20%). The Clairette, Bourboulenc and Grenache blanc varieties make up the white wines. Red wines alone represent 76% of the Ventoux appellation, they can be kept for 3 to 5 years and go well with red meat, game and strong cheeses. Rosé wines represent 20% of the production, and can be drunk with summer cuisine, they also go very well with Asian cuisine. White wines represent only 4% of the production, they are drunk as an aperitif, and with fish and seafood dishes. 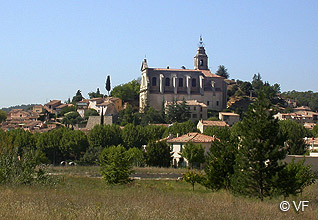