The village, the castle, its history and the surroundings 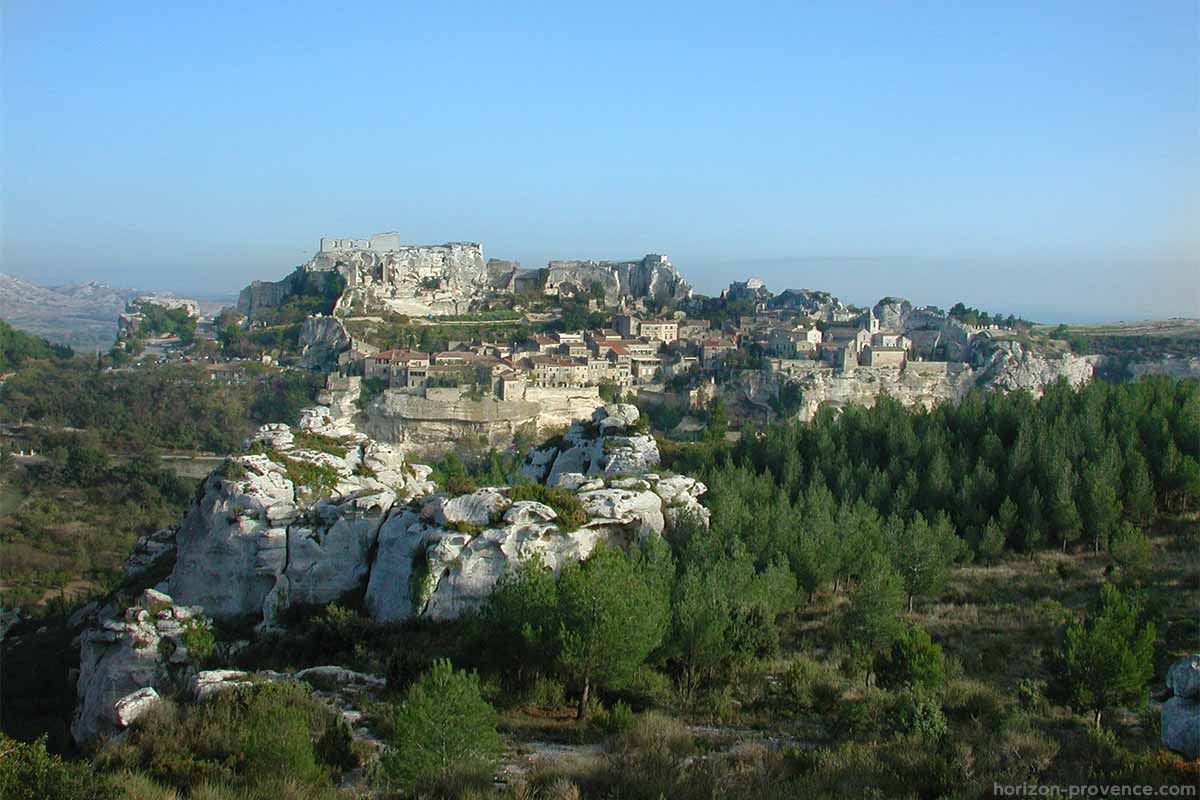 Les Baux-de-Provence, eagle's nest in the heart of Provence

For the history of the Lords of Baux joined legend. They cause recurrent conflicts with the Count of Barcelona sovereignty over the Countyof Provence in the 12th century, they areallied to the Count of Anjou during the conquest of the Kingdom of Naples in the 13th century,and with the robberies of Raymond de Turenne in 14th century,they fueled chronic and inspired poets for centuries to come.

Manyvisitors visit each year to Baux-de-Provence. This is one of themost beautiful and most famous touristic spot in the region. Thepicturesque village of Les Baux is nestled below the crest of thepromontory and its castle, sheltered from the Mistral. The "Carrieres de Lumières" attracts many visitors as it moved into the old quarry near the village.

The village of Les Baux-de-Provence is perched atop a steep foothills of the Alpilles, sheltered by the steep ridge and castle walls. The spectacular place reminds an eagle's nest perched above the valley of Les Baux, looking far away over the plain to the Mediterranean Sea.

Eagle's nest perched above a marshy plain, the place was chosen by the first settlers as a refuge and place of supervision. It controls access to a collar that clears the Alpilles. Only one gate, "the Eyguière gate" previously allowed to enter the village surrounded by ramparts. Today visitors enter more easily into the leases by a breach in the walls near the neck of the Vayède where parking spaces are arranged.

The village of Les Baux-de-Provence reached its apogee in the 16th century, when the village had 3,000 inhabitants, most beautiful homes and mansions date from this period. The village had a long and inevitable decline, its inhabitants have deserted to settle in villages Maussane and Mouriès Paradou, close to water points. It was almost abandoned before being rediscovered by poets and artists who have given him international recognition. This is nowadays one of the most visited village of Provence.

The village of the Baux-de-Provence 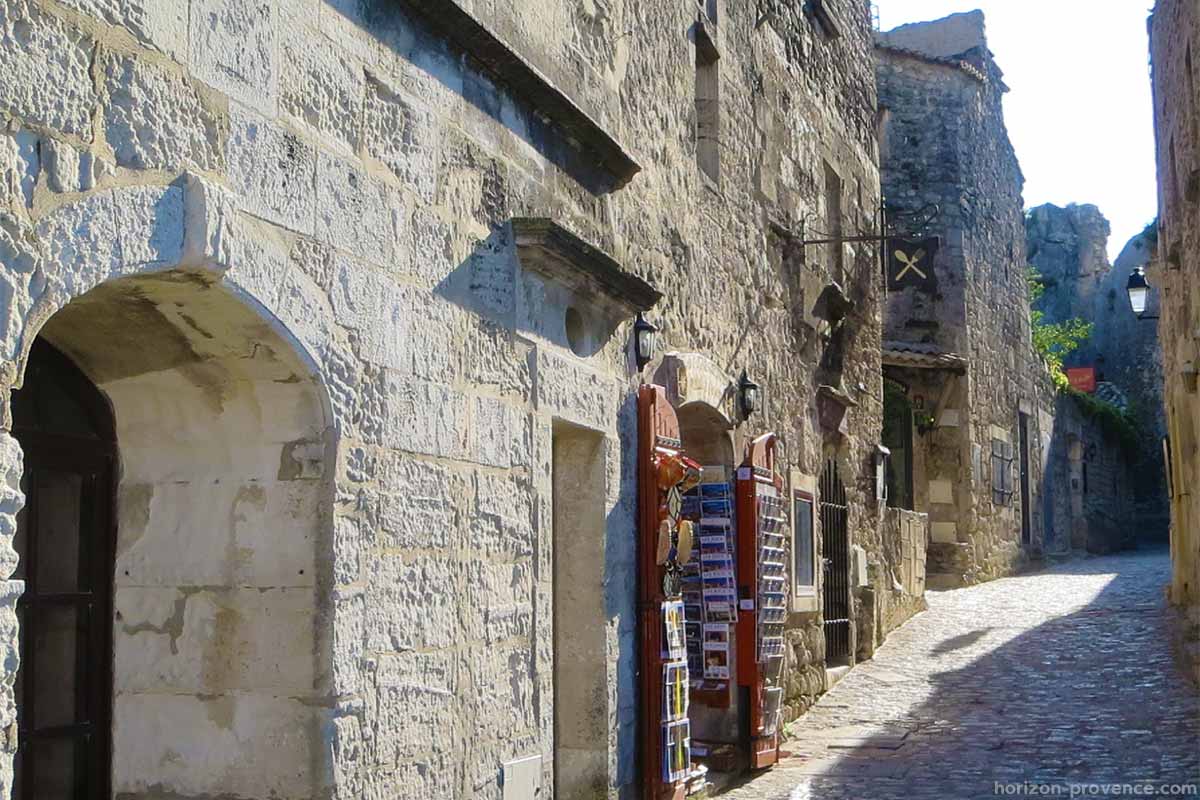 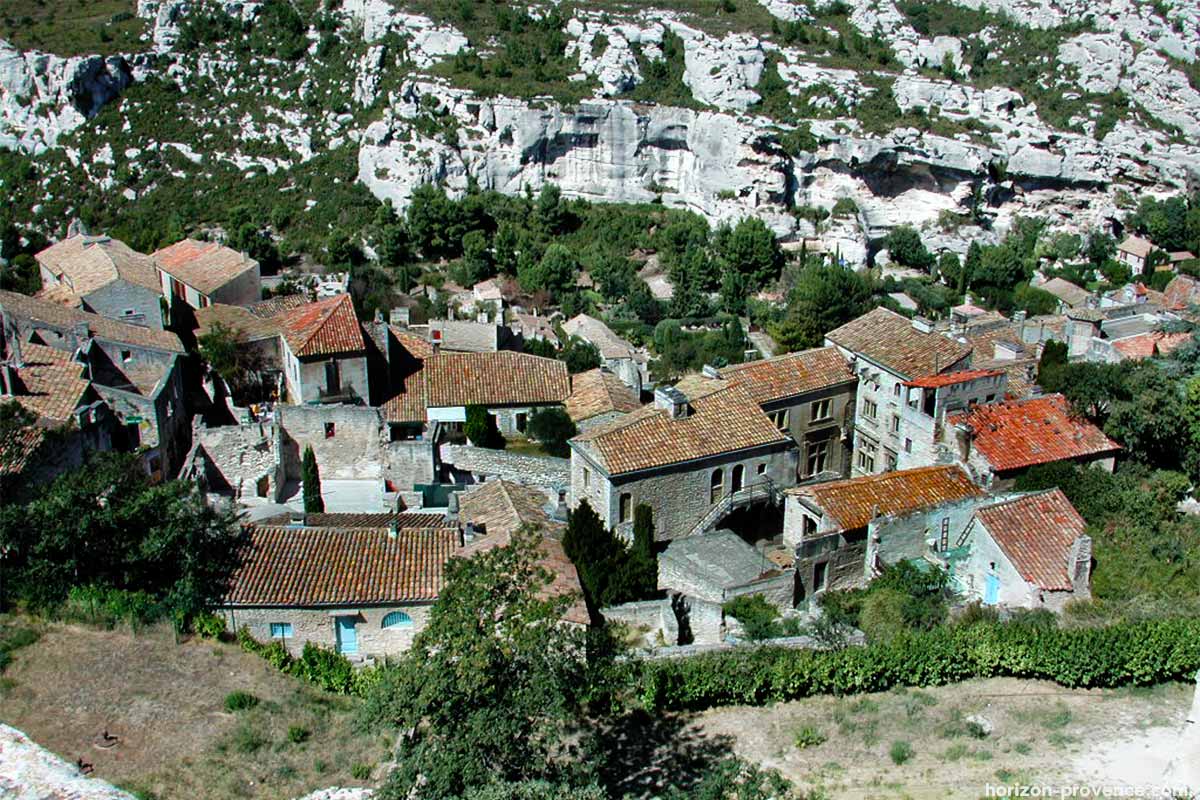 It is a maze of cobbled streets and bustling with tourists and onlooker, enlivened by souvenir shops and craftsmen. We see beautiful mansions as Manville Mansion, the King's House housing now the Tourist Office. A monumental window emerges, an enigmatic Latin inscription on the lintel is inscribed: "Post Tenebras Lux - 1571" "After darkness light." Quote from the Bible is a Calvinist motto reminds the troubled times of the wars of religion when Baux-de-Provence and its fortress was a Huguenot stronghold.

At the end of the village, a place is the chapel of the White Penitents and the Romanesque church of Saint Vincent reached by wide stairs.

The Castle of Les Baux-de-Provence

The Castle of Les Baux-de-Provence is built on the summit plateau of a rocky outcrop 241 meters above sea level, overlooking the plain of the Crau. The formidable fortress there are only sections of wall. But they have enough to impress even majestic imagination.

Thewalls of the castle included the old city of Les Baux, housed withinits walls. Of the imagination it takes to see the ornate halls, roomsand outbuildings of the richest and most powerful family of Provencein the Middle Ages. 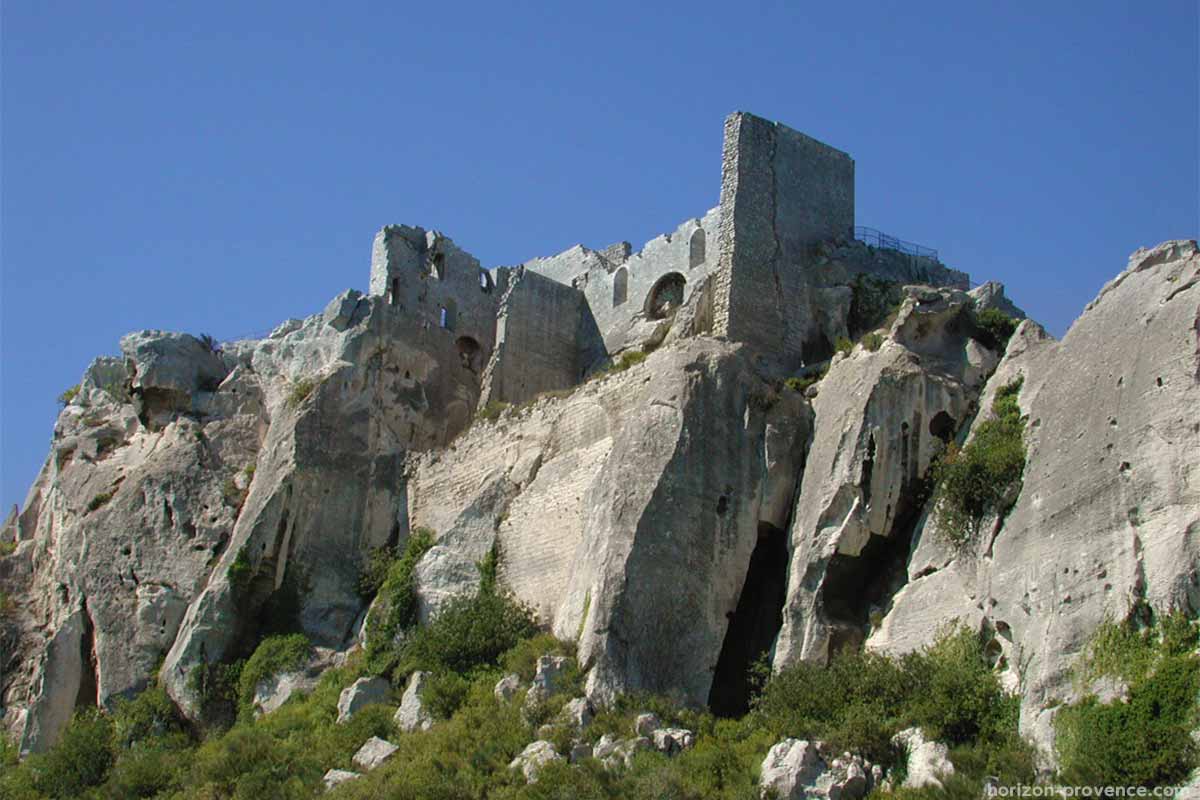 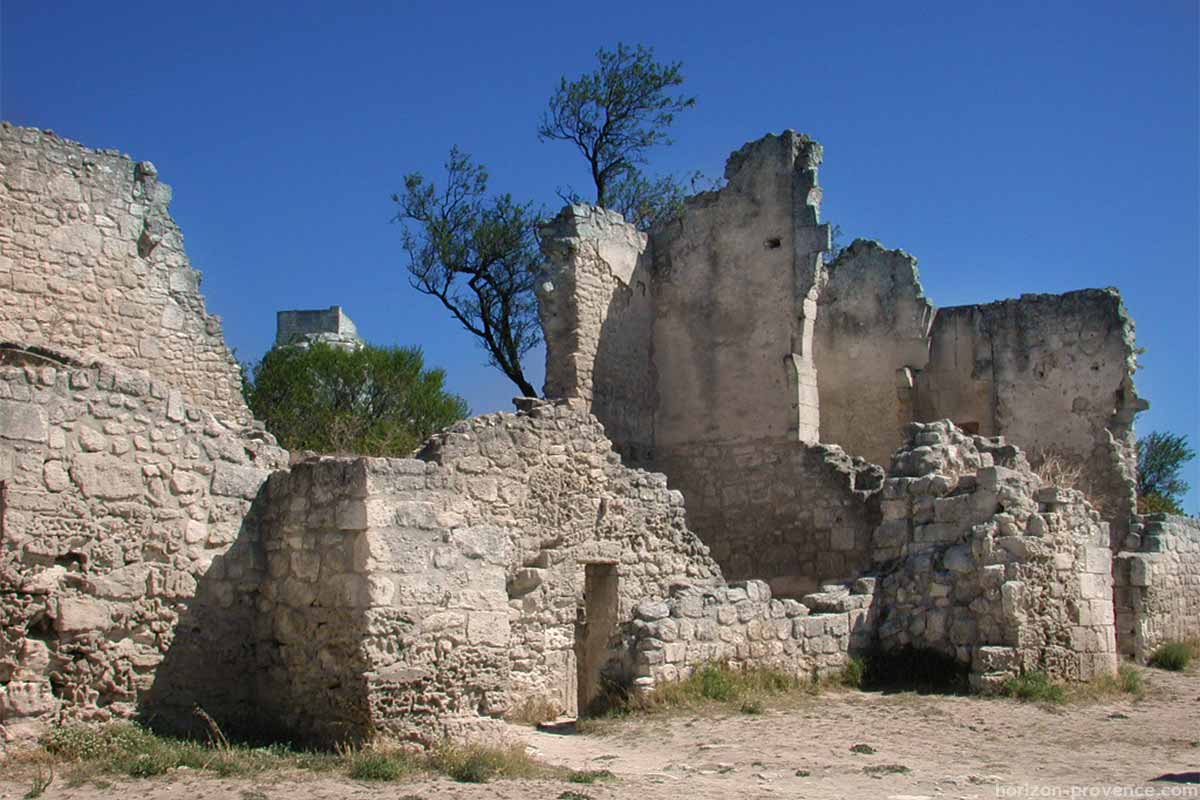 A staircaserises on the ruins of the rectangular tower 80 meters high peak abovethe beautiful landscape that spans on the Alpilles :Maussane, Fontvieille,Arles, Vacares pond, and Saintes Maries de la Mer. The place isright to remember the verses of Frederic Mistral in Calendal "Beholdthe customary arms of the lords of Les Baux, first by seniorityand splendor of Provencal families, race of eaglets never vassal,which by the tip of its wings touched the peak of all heights".

Culturespacesis the company that handles the animation Château des Bauxde Provence offers a free audio guide for the visit and activitiesfor children. Siege weapons of the 13th century were rebuilt identically:aries, Couillard, tinkers and trebuchet demonstrations are held regularly.A medieval festival takes place in September, with the reconstructionof a "storming" the castle by nearly a thousand participants.The Castle is also decorated at Christmas. 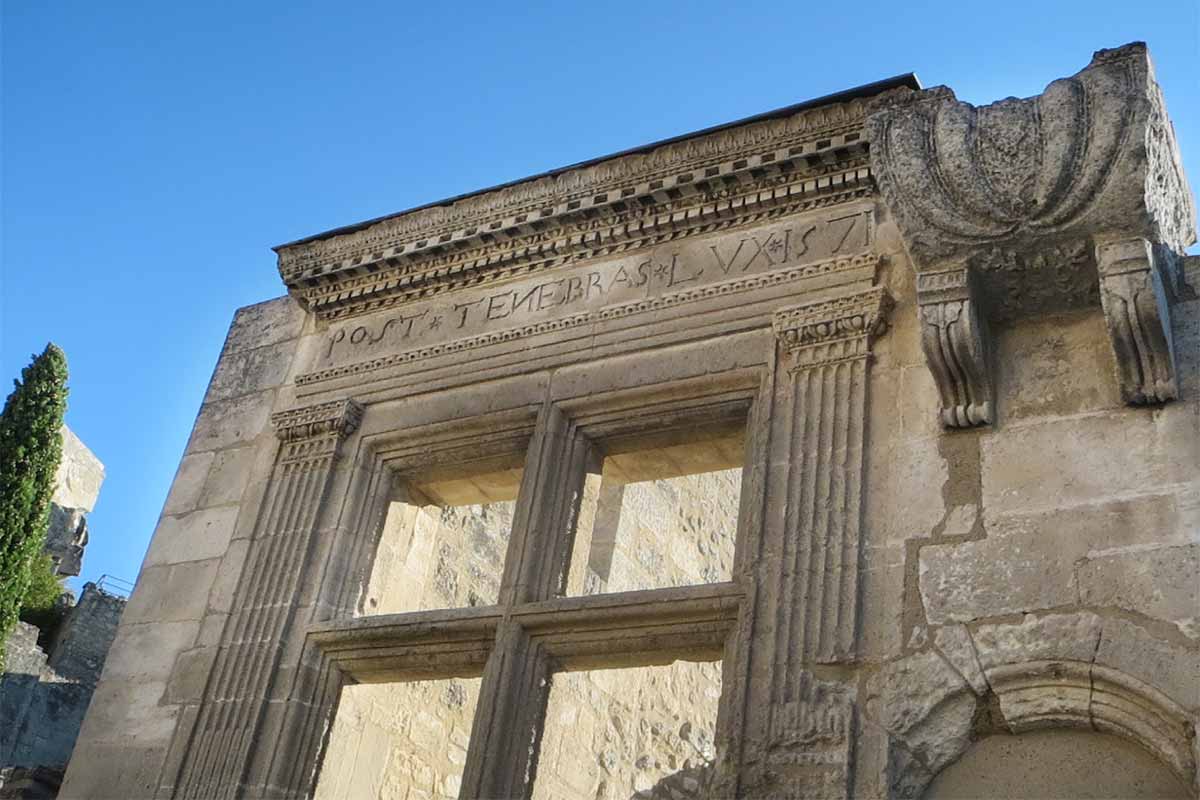 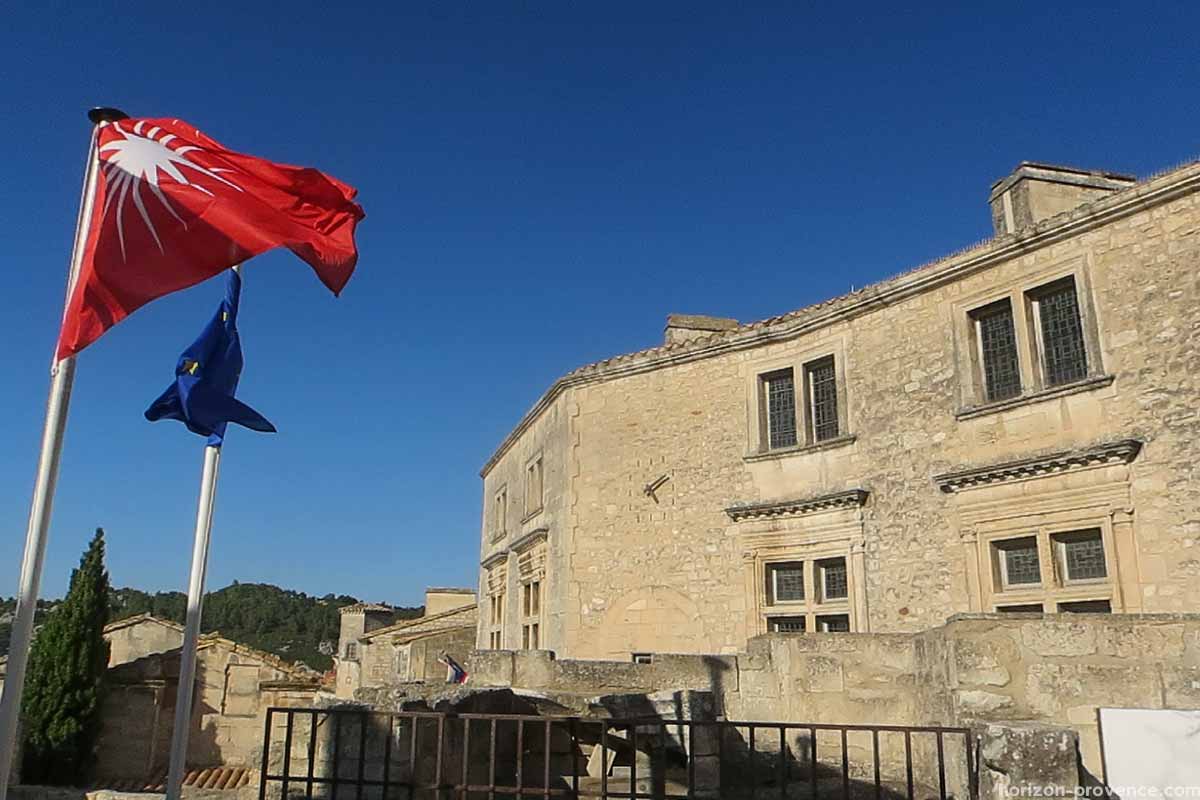 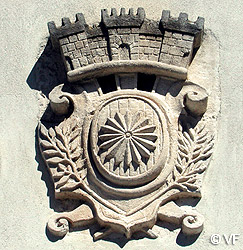 In the 9th century, Provence rises from a long period of decline,it was at this time that appears in the chronicles the first lord of the Baux, Poncius the old. By a clever alliances and marriage game, his descendants are in the 12th century at the head of many fiefs and possessions, they are one of the most powerful families in Provence.

Hugh, son of Raymond and Etiennette revives the Conlit, but he was captured in 1206 and renounced his claims.

When Charles of Anjou, Count of Provence, began the conquest of the Kingdom of Naples, he invites the turbulent lords of Provence and promise them fame and fortune : the brothers Raymond and Bertrand, sons of Barral des Baux joined him. The Baux family became one of the great families of Naples, disputing the authority to the King with Duras and Taranto families. Conflicts of Naples also span in Provence, the surrounding area are regularly devastated by mercenaries of all sides. 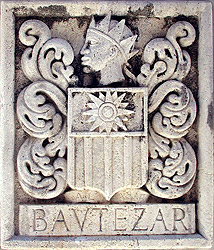 During the minority of Alix, heiress of the house of Baux, her tutor Raymond de Turenne is a real feudal lord of war. Nicknamed "the Curse of Provence", it devastates the region with force helping hand and robbery for over 20 years.

After the death of Alix goes home Baux which is part of the County of Provence. Les Baux become a barony.

"Au hasard Balthazar !" is the bold motto of the Lords of Baux who claim descent from King Balthazar, with the sixteen branches star as their emblem. According to legend, the star that led him to the stable in Bethlehem then leads him to Les Baux, where he settled.

During the Renaissance the village knows peace and prosperity, many beautiful houses and mansions that have come back to this time.

The Wars of Religion devastated Provence, Les Baux and its fortress are a Protestant stronghold. In 1633 Richelieu destroys the rebel castle to central power by force, after a siege of 27 days. Troubled times come to an end and peaceful village loses its inhabitants who settled gradually into the valley. The village and its ruined fortress fall into oblivion.

The village ofLes Baux is named from the landscape: Bau means escarpment, cliff. Les Baux-de-Provence and its castle are an exceptional site, it is also thanks to the landscape around that offers images and unique perspectives.Wind and erosion have carved limestone, showing cornices and cliffs,strange and surprising forms, threatening even, the road that joins Maillane winds along a valley is called Val d'Enfer (Hell valley).

Bauxite,alumina-rich ore, which aluminum is extracted, was discovered in1821 near LesBaux, and explorer Pierre Berthier, was named after thename of the village. The white limestone pervades the landscape wasexploited since antiquity for the construction, it has served tobuild the village of Les Baux but also the neighboring villages.A gallery in the monumental entrance was converted into a Image Cathedral(now Carrière de Lumière) by Albert Plécy, photographerand journalist Parisien Libéré.It creates a renewed each year and show a great success.

A littlefurther on, in abandoned quarries of Sarragan the house a wine cellar,buried deep in the rock, where the temperature is ideal for storingwine.

Information and accommodation near the Baux-de-Provence

Mas d'Emilie Charming Bed and breakfast at Fontvieille near the Baux-de-Provence.

Coming to the Baux-de-Provence