Aix-en-Provence was the capital of the County of Provence until the Revolution. City refined, elegant and discreet, the historical center around the Cours Mirabeau has many mansions of the 17th and 18th century giving an aristocratic, almost elitist character. The contrast is striking with Marseille located thirty miles south, a vibrant popular metropolis, major port open to the Mediterranean sea. The opposition between the two cities has been from their origin, Entremont (3km north of Aix) was the capital of the gallic tribe Salyens, often in conflict with the Greeks of Marseilles, Aix was later the administrative capital of the province under the Romans, then capital of the County of Provence from the 13th century, and finally the seat of the Parliament of Provence and residence of the royal governor representing the central government. 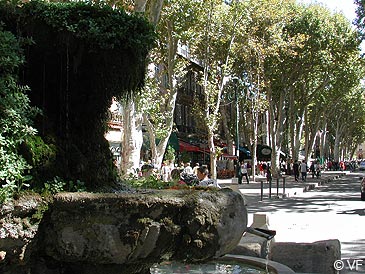 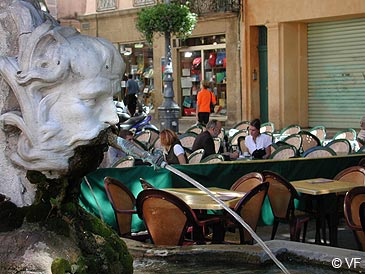 Aix-en-Provence now has 150,000 inhabitants, it is a sub-prefecture of the Bouches du Rhone, and a cultural capital of Provence. Prestigious university center in the region, Aix owns largest and oldest university of Law and Letters. All year round cultural events take place including the Festival of Music in July, initiated in 1948, which has an international reputation. Aix has a unique heritage and has many museums including The Granet Museum, whose collections make it one of the richest museums in France. 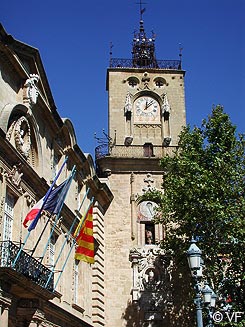 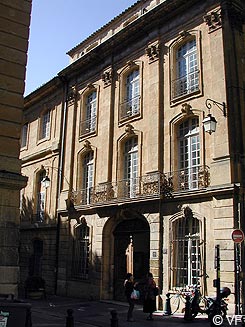 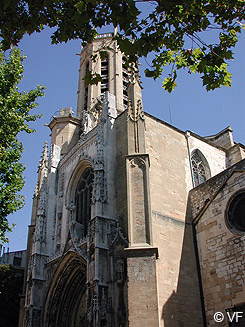 Aix en Provence was the birthplace or hosted many scholars and artists, the most famous are the writer Emile Zola and the painter Paul Cézanne (1839-1906). The contemporary painter Vasarely has a museum in his name. 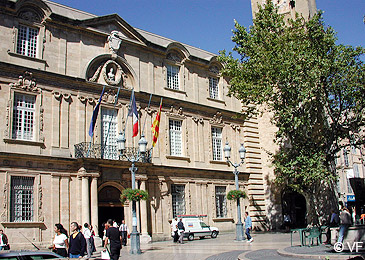 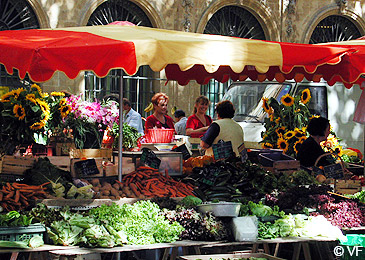 A Stroll in Aix-en-Provence

Awalk in Aix-en-Provence can begin to Liberation Square where stands the tourist office and where the roads converge from Marseille (Avenue des Belges) and Avignon (Boulevard de la République). A the the center of the roundabout stands the Fountaine de la Rotonde, a splendid fountain 12 meters high surrounded by an ornate lion and dolphin pool and sculptures representing the Arts, Agriculture and Justice. 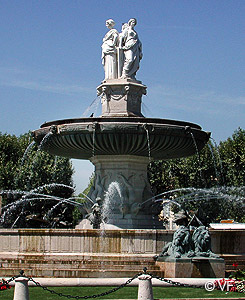 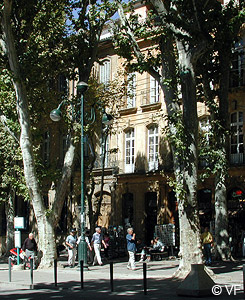 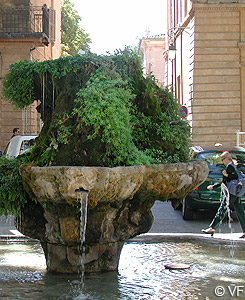 Le Cours Mirabeau is the heart of the city, this magnificent avenue is considered by many to be one of the most beautiful in France, it is Peter Mayle's favourite. It separates the old town of medieval origin from the district built in the 17th century. On the sunny side of the avenue, the cafés and restaurants offer attractive terraces where the sun's rays are filtered by the foliage of the large plane trees, on the other side the 17th and 18th century mansions diaplay their elaborate facades. The plane trees form a vault that protects passers-by from the heat and encourages walking and relaxation. Peter Mayle notes the perfect proportions of the avenue, in accordance with the urban planning principles of Master Leonardo da Vinci for whothe harmony is perfect when the "street to be as wide as the height of the houses". The Fontaine aux neufs canons - Nine-Gun Fountain - et la Fontaine chaude - Hot Fountain - from which spring water flows occupy the centre of the roadway.

Aix is a city of water, fountains are numerous in the old city. Near the ruins of the Roman thermal baths, a thermal establishment is still in operation. In the centre of the medieval city, the town hall dates from the 16th and 17th centuries, it is surmounted by the elegant Clock Tower (early 16th century), built above a door of the medieval enclosure. Hôtel des Postes occupies the former Grain Hall, which separates the town hall square from the neighbouring Richelme Square. 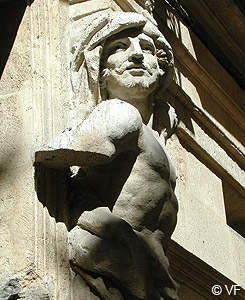 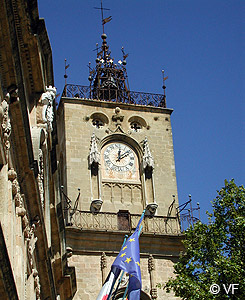 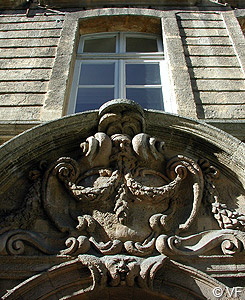 Aix-en-Provence has many religious buildings. Saint Sauveur Cathedral dates from 1175 but was rebuilt and enlarged several times, so that we can describe his composite style . The Church of St. Madeleine near the courthouse, was built on the site of the old palace of the Counts of Provence.

South of the Cours Mirabeau extends neighborhood built in the 17th and 18th centuries. Very well preserved, it is drawn by the rule of classical planning and contains beautiful buildings. In its center is the Fountain of the Four Dolphins, considered by many as the most beautiful of Aix-en-Provence. 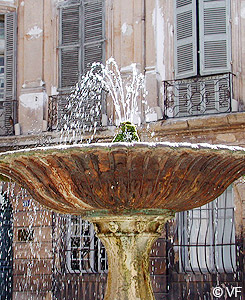 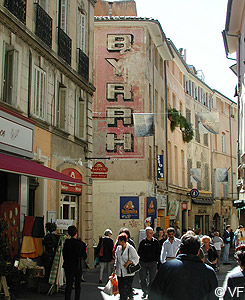 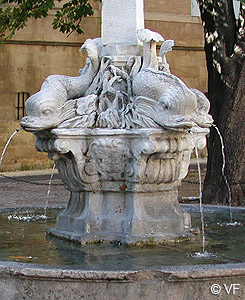 The oppidum of Entremont, three kilometers north of Aix, Salyens had established their capital. In recurring conflict with the Greek of Marseilles, they appeal to the Romans to get rid of the threat posed by Celtic-Ligurian people. The consul Sextus Calvinus destroyed the oppidum of Entremont and based on the plain Aquae Sextiae (Aix), a military town. 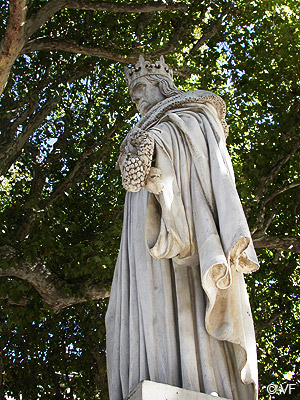 René d'Anjou, roi de Naples, Comte de Provence The consul Gaius Marius returns twenty years later with the Roman legions, he destroys a theatening invasion of Germanic peoples Cimbri and Teutons around Aix, he built in Aix monuments and aqueducts of a Roman city . After the conquest of Gaul, Julius Caesar gives the city the status of a colony. Aix enjoys great prosperity,like cities around like f Vaison, Arles, Nimes, it became the capital of Narbonnaise (southern part of Gaule) second during the Late Empire.

Long overshadowed by Arles, Aix became the capital of the County of Provence during the Angevin dynasty. King René, the last of the Counts of Provence, made his principal residence, with is a court of a great cultural splendor. Provence is united to France in 1481, the Parliament of Provence in Aix created in 1502.

The 16th century was troubled, Aix is taken by the emperor Charles V in 1536 which claimed the County of Provence, and was crowned king of Arles in Saint Sauveur Cathedral, before having to retire. The parliament of Aix inauguratesReligion wars in Provence by the fierce repression on the Vaudois in the villages of the Luberon. In Aix-en-Provence even religious wars also provoked some bloody battles, as some of the people opted for the reformed religion. Provencal proverb says "Mistral wind , Parliament and Durance are the three plagues of Provence". 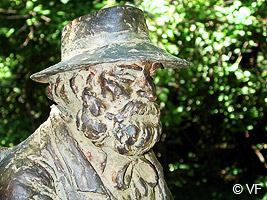 Paul Cézanne, painterThe 17th and 18th century were the heyday of the city where are built its beautiful mansions, the nobility and gentry of Provence live in Aix and the surrounding countryside, leaving the memory of a great refinement of the art live year Provence.

During the Revolution, Aix is still prefecture of Bouches du Rhone from 1790 to 1799, it lost then its administrative status to the benefit of Marseille.

The 19th century was marked by the artists: the painter Cézanne many times represented the Sainte Victoire mountain, is the childhood friend of the writer Emile Zola.

Aix-en-Provence is located in the department of the Bouches du Rhônes (13). The city is served by TGV train station.