Festival of theatre and performing arts

The Avignon Festival is in France the event of the year that all people interested with theatre and performing art wait for.

The Avignon Festival was created by Jean Vilar who came in the Cour d'Honneur of the Pope's Palace for the first time in 1947. He made of the Avignon Festival the Festival par excellence, where a demanding theatre come to meet the larger public. Sixty years after its debut, its success is still at the top.

Actors made the legend of the Avignon Festival, Jean Vilar of course, but also comedians of his troop : Gérard Philipe, Jeanne Moreau, Maria Casarès and many others. The Festival d'Avignon is also a mythical stage for theatre in France : the Cour d'Honneur of the Pope's Palace.

Many words are written on the Avignon Festival every year but it is above all a living experience. 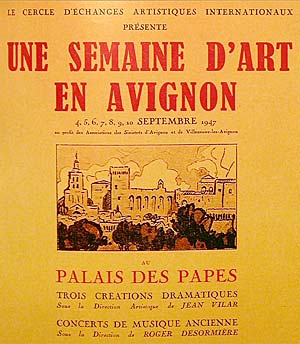 The poet René Char and Christian Zervos inaugurate in September 1947 a "Art week in Avignon". They organize a contemporary art exhibition in the pope's Palace and they invite the director Jean Vilar to invest the Cour d'Honneur of the palace. First hesitating, Jean Vilar presents three theater pieces of which "Richard II" of Shakespeare.. The majestic and austere set transcend dramati theatre. The public, conquered wants more, he is faithful to Avignon meeting since 1947.

The Festival is a growing success during the 50's. The performances of "Le Cid" (Corneille), Richard II (Shakespeare), " The Prince of Homburg" (Heinrich von Kleist) in the Cour d'Honneur makes the Avignon Festival's legend enter in the history of french theatre.

Jean Vilar's Festival, the beginning of the Festival d'Avignon

Jean Vilar has a militant approach : he bets on desire of a young and popular public for quality theatre confined until now in traditionnal stages. He makes a demanding and popular theatre. 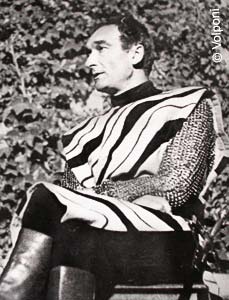 Jean Vilar dedicates himself completely to the running of the Avignon's Festival from 1964. He invites directors of theatre, he opens the Festival to Dance and Cinema, played in new stages in the city. Jean Vilar wants to make during the Avignon Festival a place for cultural exchanges and thought, griped on society changes.

Nevertheless in 1968, just after the student revolts of May, Jean Vilar faces an impervious and radical youth.

Jean Vilar passes away in 1971 just before the opening of the 25th Avignon Festival. Paul Puaux, his assistant takes the run. He follows the direction started by Jean Vilar, he hosts in the Festival the diversity of performing arts : cinema, readings, musicals, children theatre, meetings. Paul Puaux resigns in 1979 to manage the "Maison Jean Vilar" which keeps the Festival memory. The Festival needs a second wind.

Bernard Faivre d'Arcier was appointed artistic director from 1980 to 1985, and from 1993 to 2003, interrupted by Alain Crombecque between 1986 to 1992. During this time, the Festival modernizes and institutionalizes. The faithful public always comes in numbers. The Avignon Festival is a window on theatral creation in France and in Europe. The task of the artistic director is to conciliate the public with the demand of quality and open a large place to contemporary directors and creators.

In 2003, the Festival was canceled at the last moment, for the first time since 1947, because of a strike. The following years reveals that the public is still there. More than the Avignon Festival, the economic model of theatre and performing arts is in crisis and during the Festival the tensions are in their climax. The Festival focuses the tensions of our society.

Since 2004, Vincent Baudrier and Hortense Archambault took the succession as directors of the Festival. They asociate each year an artist to the choice of shows. It was the german theatre director Thomas Ostermaeier in 2004, the controversial flemish artist Jan Fabre in 2005, the dance choreographer Josef Nadj in 2006, and Frederic Fisbach, a french theatre director in 2007.

It is still early to get lessons from the experience, we can however say that the Festival is not declining. Certainly the enthousiasm of the golden age , the idealism of the 60's and 70's dimed. But the Festival is still a sensitive witness of the society evolution, as dreamed Jean Vilar. 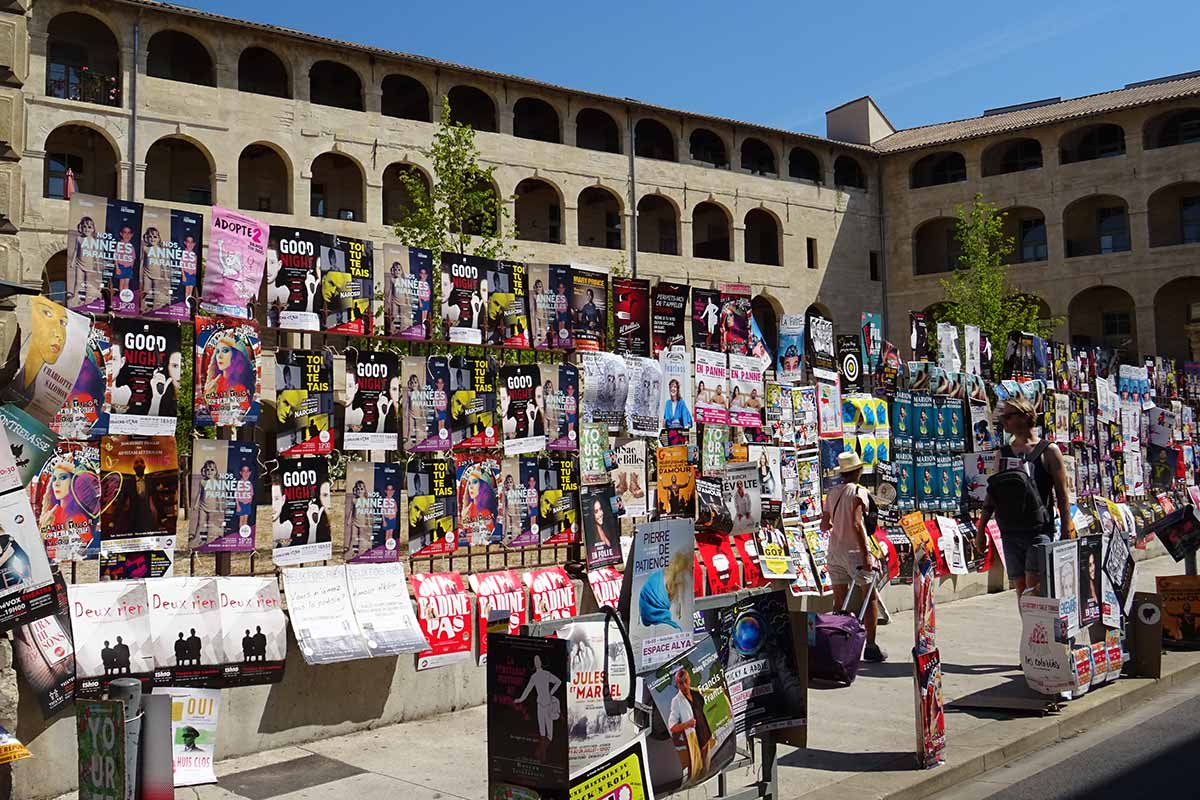 It is not easy to define the Festival Off in Avignon : feast, fair, supermarke of theatre, the Festival Off is all of that and still much more. During the three weeks of the 'official' Avignon Festival, theatre and stages appears spontaneously in the centre of the city. A huge number of shows are proposed to the simple spectator.

The luxuriant exuberance of shows numbers drives to a darwinian struggle for recognition : posters occupy all available space, thousands of leaflets are handed out, troups parade in the streets to attract public, keeping constant animation in the centre of the city.

To play in Avignon, no selection is made, from the amateur theatre to the most confirmed artists, every one come in Avignon to find the public recognition but also contracts with professionnal programmer coming from all over France to find shows.

André Benedetto, today director of a permanent theatre in Avignon, the "Theatre des Carmes" was the pionneer of the Festival Off : not invited by Jean Vilar, he presents independantly his show during the Festival in 1966. In 1968, the banning of an independant piece by authorities starts the unrest. In 1971, this festival "bis" offers 38 shows in 12 stages, it is named Festival "Off" in opposition to the official Festival often called Festival "In". In 2007, the Festival Off offers more than 970 shows.

The Avignon Festival today can not been conceived without the Festival Off. Far from being scared by the plethora and diversity of shows, public comes in numbers. Every one has his way to choose his way through jungle of shows : rumour, reading of critics, intuition, ...

The Festival Off is a cultural experience renewed every year, always validated by the public. Its success is a proof of the Living art vitality.

Windows opened on the Avignon Festival

Legendary characters stealthily occupy the city of the Popes. During your stroll in the historic city, raise your eyes : following a street, behind a window you'll catch sight of the Prince of Homburg, Scapin, Macbeth, Marianne, Lorenzaccio, Harpagon, Antigone, Hamlet, and many others ...

... You'll recognize the features of the great actors who embody them and where their voice still resound : Gérard Philipe, Jean Vilar, Jeanne Moreau, Daniel Auteuil, Maria Casarès, Daniel Sorano and many others like the choreographer Maurice Béjart, the mime Marceau or Bartabas and its equestrian theater.

The painted windows are made by M. Pochy et D. Durand