Mornas and its fortress in the Rhone valley

The Fortress > The village > The church Val RomÃ©gier > Photos > Information

Motorists arriving in Provence by the Rhone Valley can not fail to notice the ramparts and keep of the fortress Mornas Sentinel unwavering situated high on the cliffs, all flags to the wind.

The visit of the Mornas Fortress is an opportunity to admire a beautiful view over the Rhone valley behind the walls with battlements. Thanks qux guided tours, is also a fun way to learn the life of lords and peasants in the Middle Ages, and the handling of weapons. To the delight of young and old. 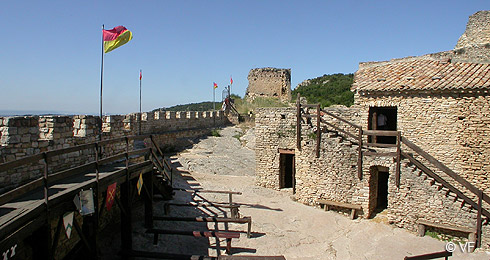 Mornas citadel has never been the residence of a lord, that's why it is called citadel or fortress rather than castle. The stronghold that has withstood the vicissitudes of time until our days was built by the Count of Toulouse in the 12th century. It then passes under the control of the Holy See and is part of Venaissin County. It is a safe haven when the 14th Century Companies and Rovers go in the region in order to extort the pope a portion of its wealth.

On Mornas fortress flat memory of the cruel Huguenot leader Marquis Charles de Montbrun. In 1562, he laid siege to the fortress poorly defended. The small garrison negotiated his surrender but denying his word, Montbrun murders women and children refugees in the chapel and precipitate the garrison in the empty top of the cliff.

Once the religious wars ended, the Mornas fortress loses its usefulness, it is unmaintained and its ruined walls fall. In 1977, the association "Friends of Mornas" urges the restoration of the citadel. Thirty years later, the walls are up, and a fortress perched on a cliff has regained its imposing aspect. 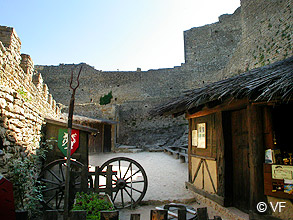 Mornas village nestles at the foot of the 137-meter-high cliff. The hill was a shelter against frequent floods of the Rhone, which sometimes extended his bed to the foot of the cliff, the fort was a haven in turbulent times: the Rhone Valley is a thoroughfare crowded by merchants, travelers, and armies.

Mornas and its heights are occupied from Neolithic times. It is an important strategic point for controlling the traffic of the Rhone Valley. The Romans implanted a castrum. During the Middle Ages Mornas belongs successively to the Holy Roman Empire, to the archbishops of Arles, the Count of Toulouse, then the Holy See after the Albigensian crusades, it is then integrated into the Venaissin County.

The pink roofs of village of Mornas village with perpendicular streets press the foot of the cliff. The walls of Mornas disappeared in the 19th century, but the doors remained. The magnificent plane trees in the "Course of the planes" provide welcome shade and coolness in summer.

The Church of St George in the village dates from the 19th century, its facade is inscribed the Republican motto "Liberté - Egalité - Fraternité" since 1905, when the separation of church and State. It is one of eight "Republican churches" of Vaucluse.

Walking up to the fortress by the narrow and steep small valley of Santa Baudile The last building is the church of the village of Val Romigier striking by its beauty. Originally Romanesque, it was very damaged during the wars of religion, and then happily restored. It is a monument with three naves with transept and central octagonal dome that fits harmoniously into the landscape.

Information and accommodation nearby Mornas

Selected bed and breakfast in the Rhone Valley

[an error occurred while processing this directive]