rue Banasterie and its neighborhood in Avignon 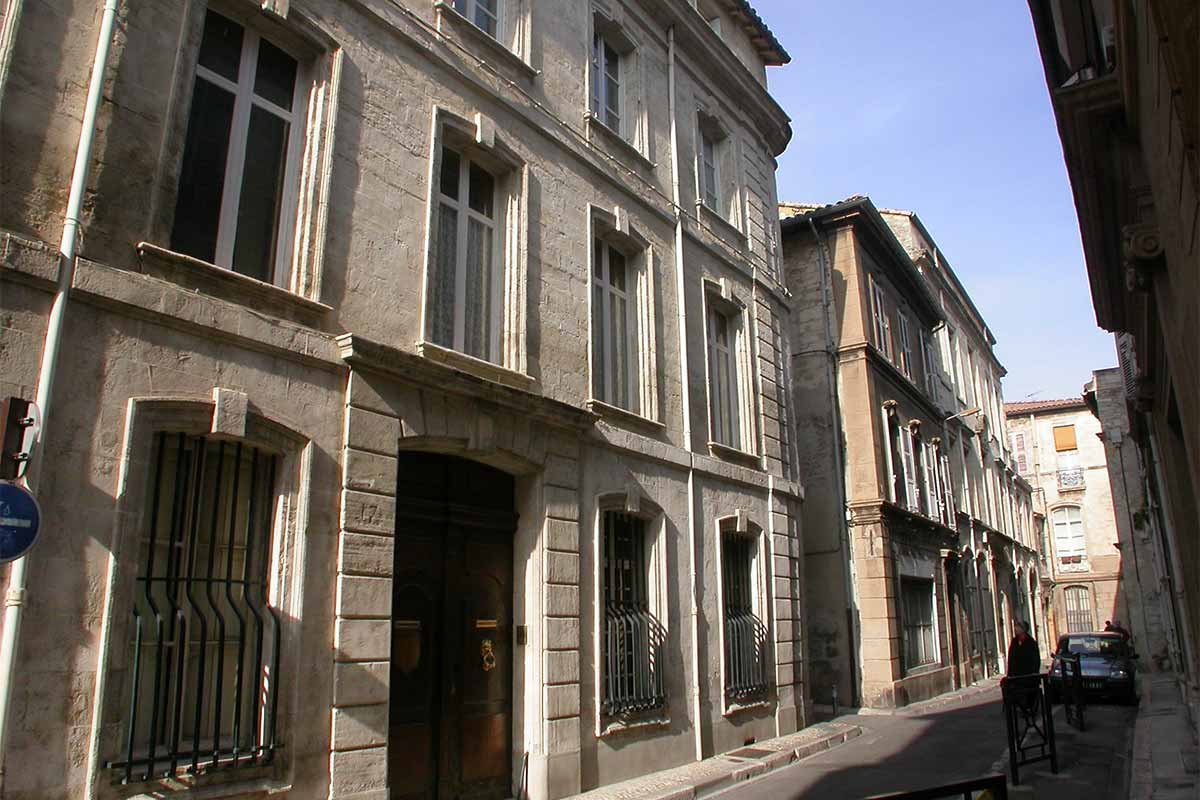 The narrow Banasterie street weave behind the Rocher des Doms and the high Pope's palace walls. It is yet edge by some splendid façades of the 17th and 18th century mansions.

The buildings are nowadays patinized by the passing of time, the descendant of the then rich inhabitants moved for more modern area.

They let behind a picturesque street which from attentive passer-by will catch all the nostalgic charm.

The Madon de Chateaublanc mansion is the most beautiful exemplary of the street, it was built by the archictect Pierre II Mignard who designed also the Vervins mansion.

The name "Banasterie" comes from provençal language "banaste" meaning "willow basket". Baskat makers settled there at the street extremity near the Rhône river. 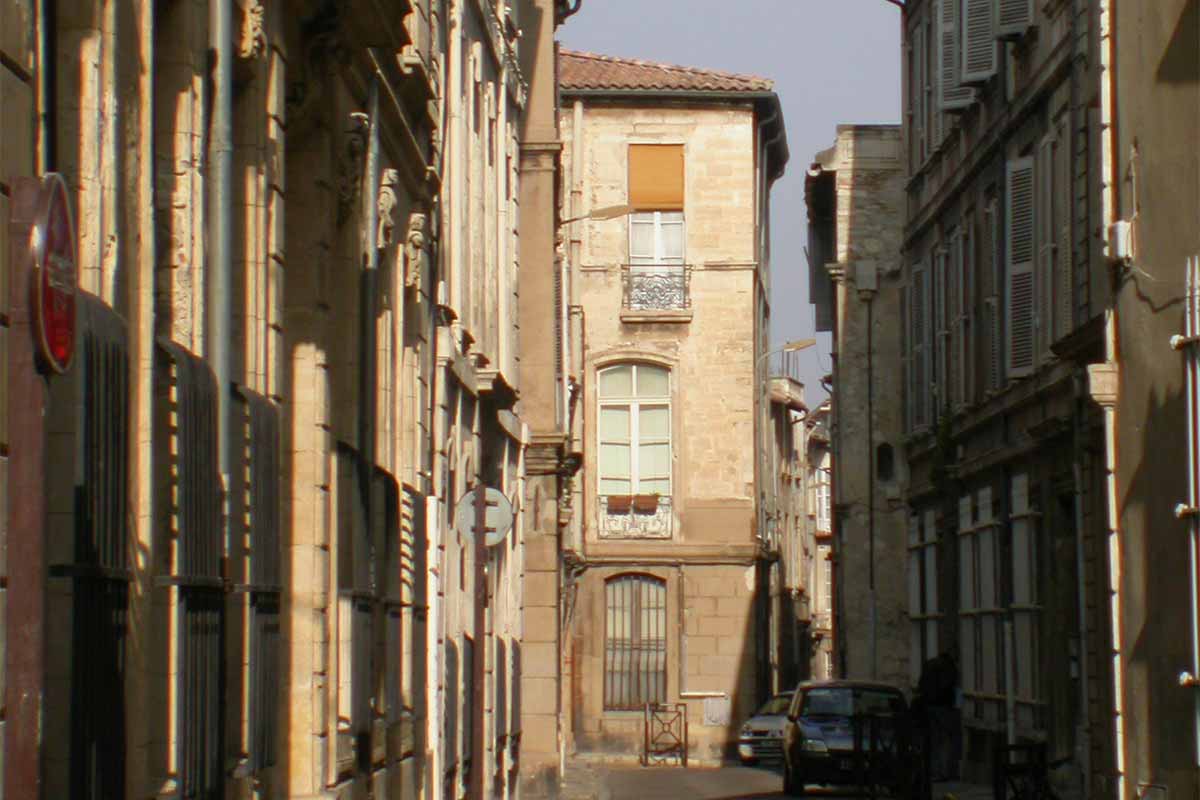 Chapel of the Black Penitents of Mercy 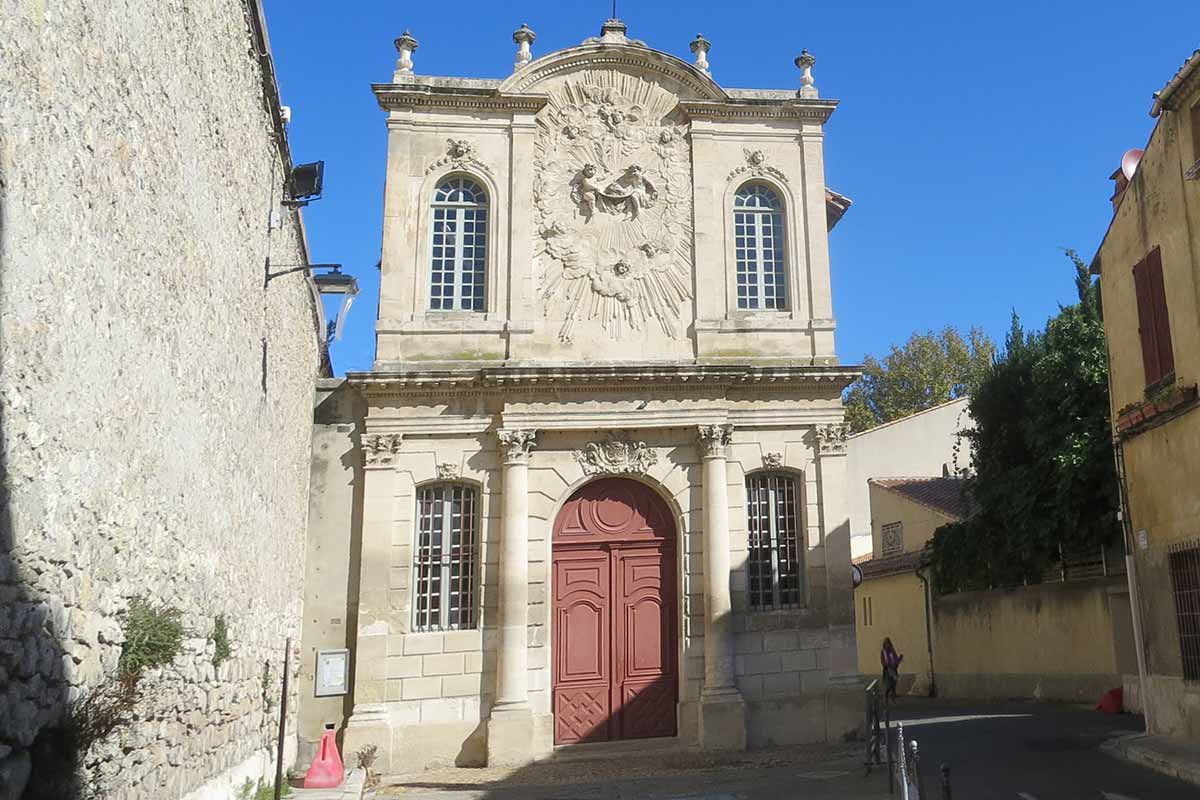 Under the walls of the old prison stands the Chapel of the Black Penitents and Mercy, whose baroque façade is magnificently decorated. In 1739, Thomas Lainé restored the chapel and drew a facade decorated with a superb bas-relief: two angels took the head of Saint John the Baptist, patron saint of the brotherhood The Black Penitents were a religious brotherhood, their mission was the spiritual and material assistance of the prisoners and condemned to death. On the anniversary of their brotherhood, the Black Penitents had the exceptional privilege of pardoning a death row inmate. They exercised this privilege for two hundred years until the Revolution.

The hôtel de Vervins on the place de la Mirande

The "place de la Mirande" is a pretty little square, paved with river stones. It is located just behind the Pope's palace.

The square is accessible coming out from the Pope's palace visit, or by the picturesque street cut through the rocks, overhanged by the 50 metres high Saint Laurent tower.

The Vervins mansion was built in 1687 where stood previously a cardinal palace. The architect, Pierre II Mignard designed the façade in the same way as the Madon de Chateaublanc mansion built in a contiguous street. 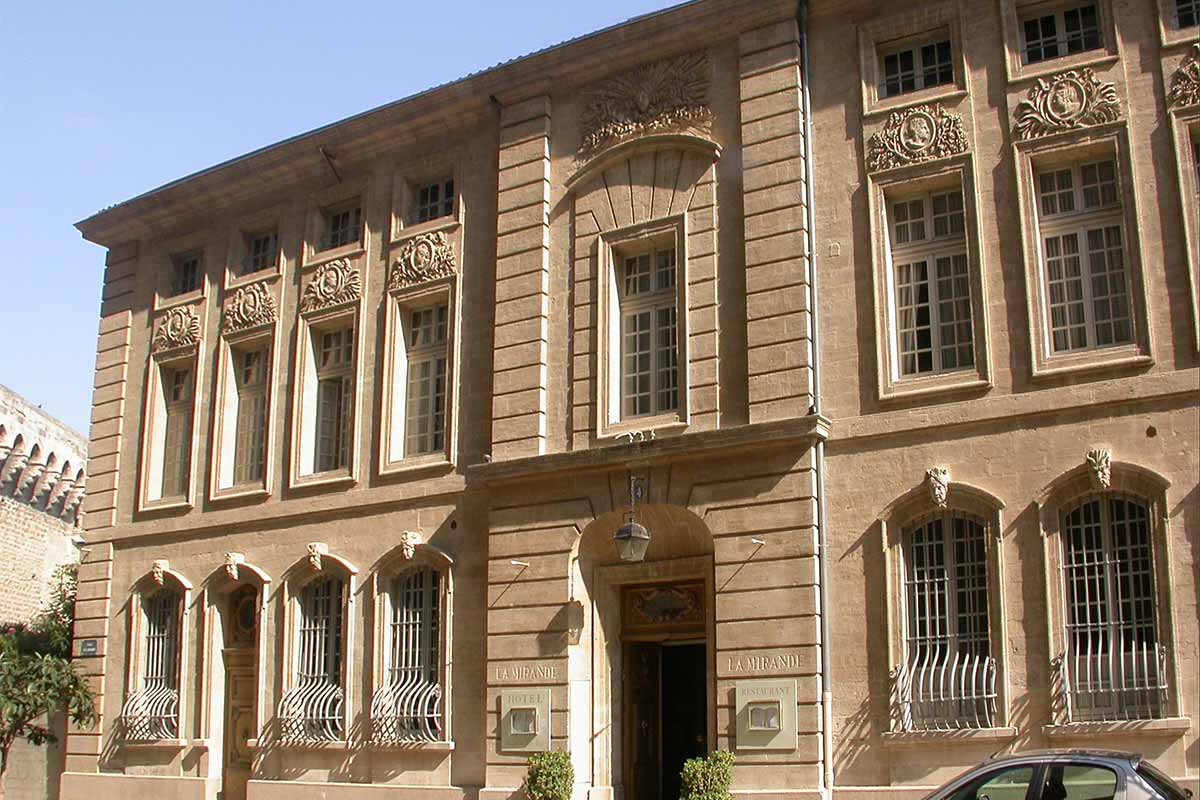 A luxury hotel stands nowadays in the Vervins mansion, it took the name of the square : Hotel de la Mirande. 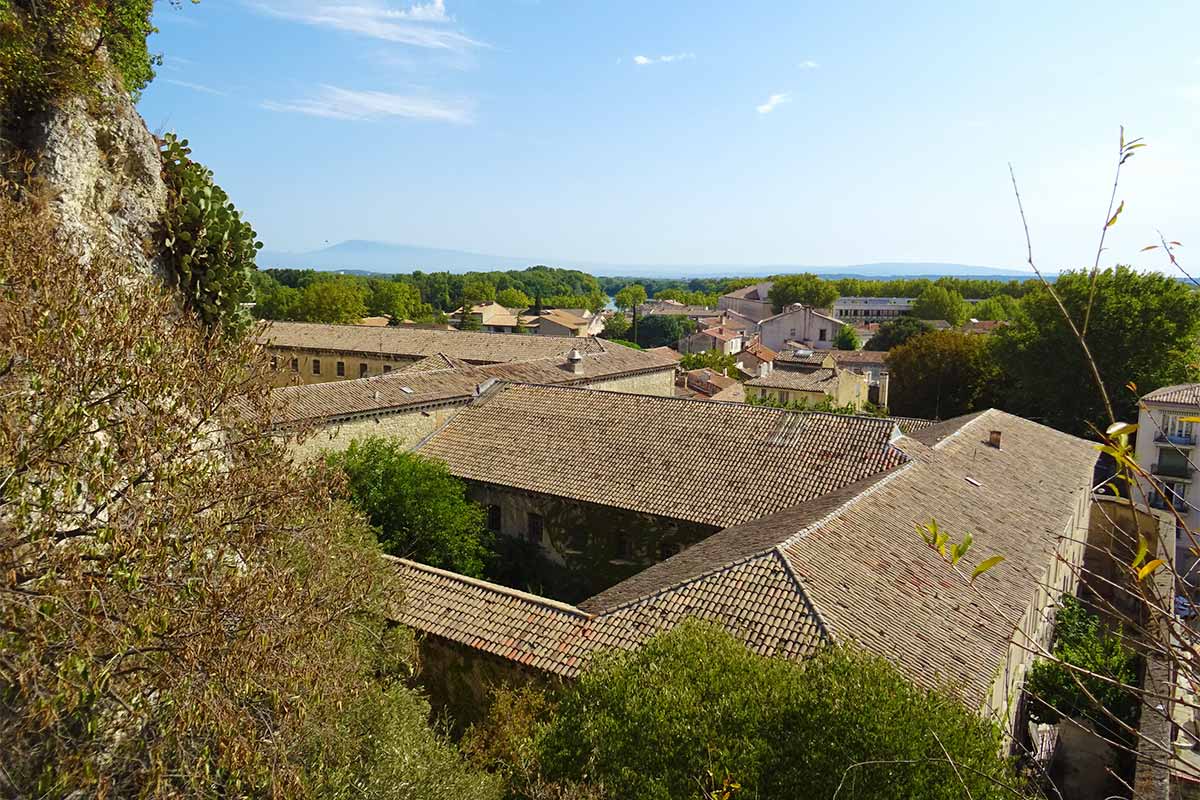 At the foot of the Rocher des Doms the Sainte-Anne prison was in operation from 1864, when it was built in 2003. It is now being renovated to make it a place to live with housing, restaurants, a youth hostel, cultural places, opened to the city. 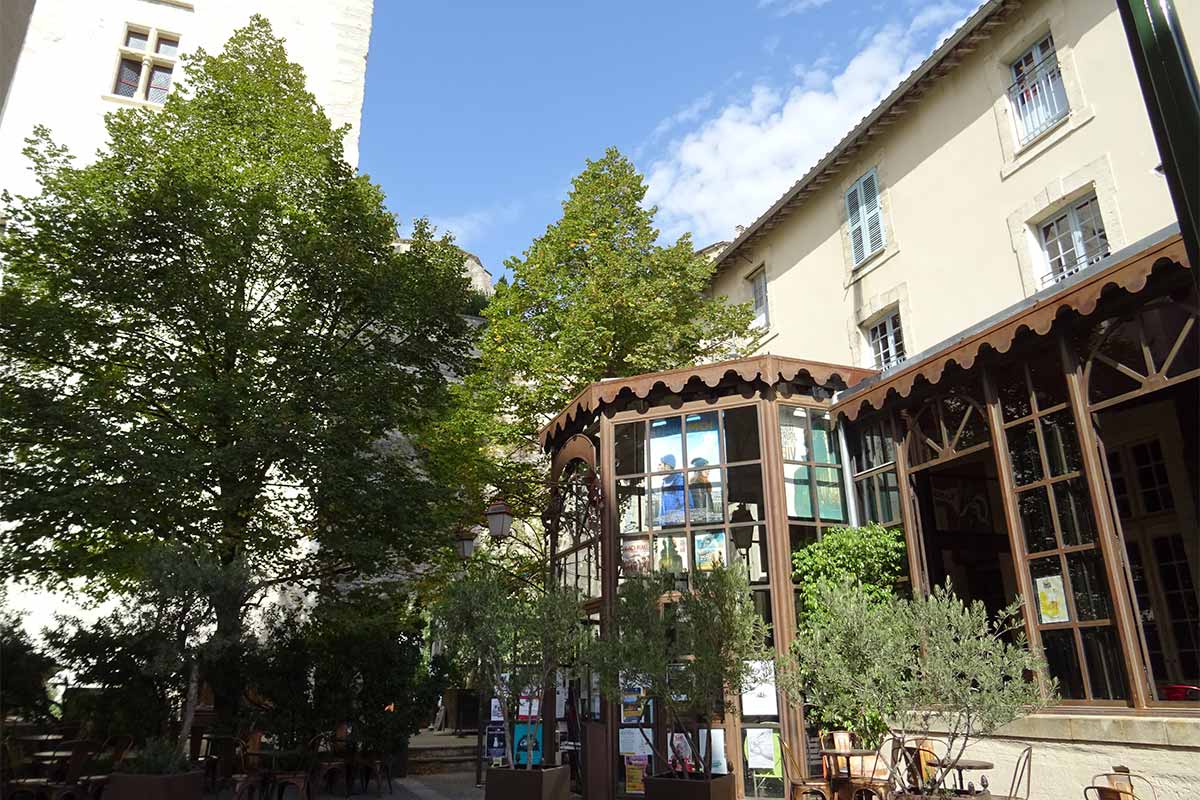 The Utopia cinema is an emblematic cultural place in Avignon. Created in 1976, this art cinema is located in the Manutention building at the foot of the Palais des Papes, under the imposing Trouillas tower. It is a major cultural centre in Avignon with a restaurant and a café and an AJMI concert hall that hosts Avignon Jazz evenings. The escalier Sainte-Anne 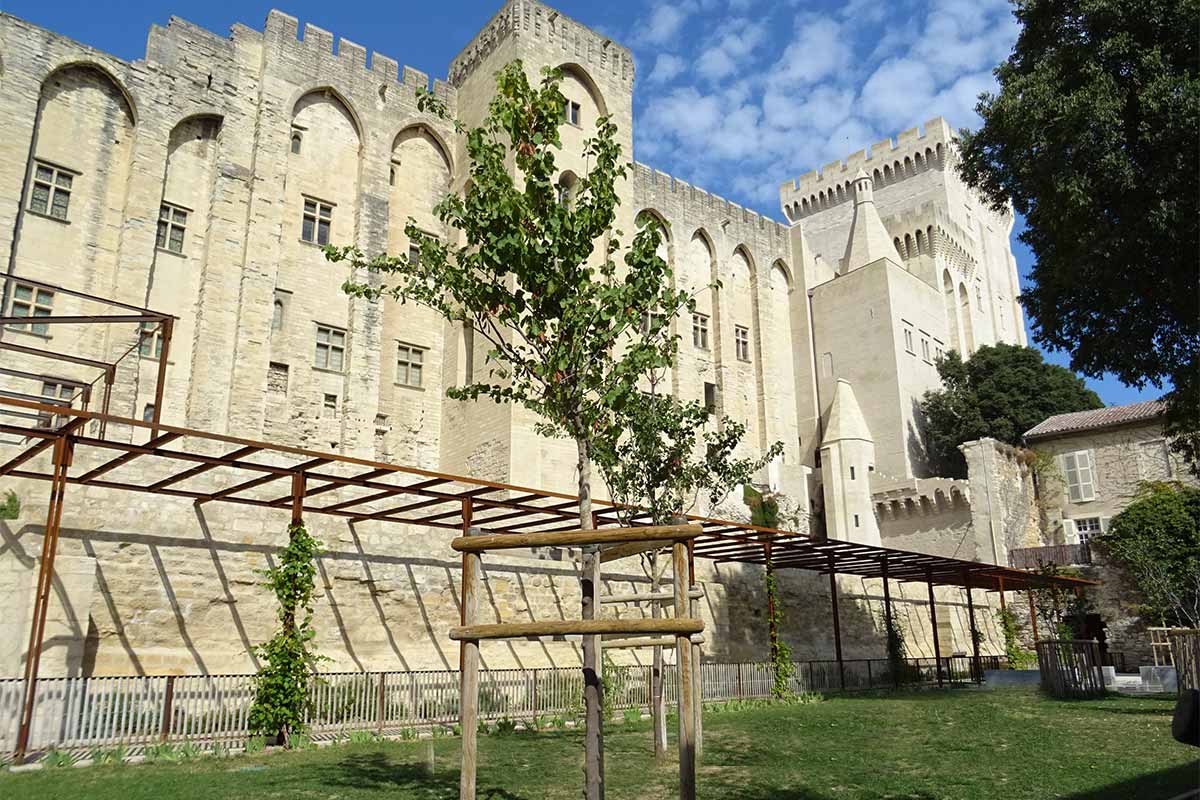 Under the walls of the Popes' Palace was an orchard planted at the request of Pope Urban V, enclosed by a wall of which some parts remain. The place has recently been converted into a public garden, open from 8am to 11pm, which directly links the Utopia cinema and Place de la Mirande. From time to time, the Verger Urbain V hosts concerts and cultural events.

Photos of the rue Banasterie and its neighborhood

Practical informations about the area of the rue Banasterie

Coming to the rue Banasterie